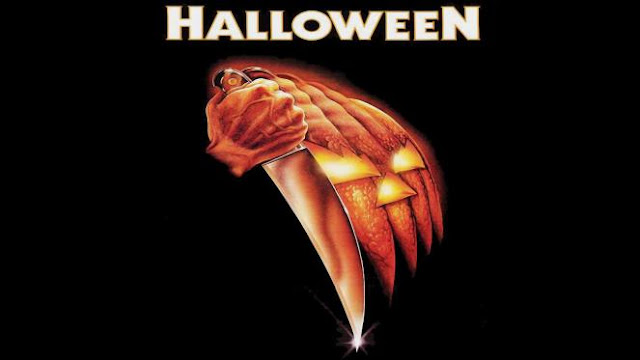 From the off, Halloween is a merciless thriller. It is a movie that is so violent and scary that some compared it to Psycho and it is a terrifying film about what one character calls, evil personified. That comment leads us to a little six-year old boy who murders his big sister at the beginning of the film and who is sent away. His psychiatrist later describes him as someone he tried to help for eight years and then spent the next seven trying to keep locked up. But he manages to escape and with Halloween aproaching he returns to the same house and street where he commited his gruesome first murder. And with the local babysitters on the phones to their boyfriends, he goes about his task.

That's all I'm going to say to describe Halloween because the whole film is a visceral experience. In fact, it feels like we aren't even watching a movie, we're having all this happen to us and that is why this one works so well. If you don't like horror movies then certainly don't try this one. Credit should be given to the movie makers here who tried to scare us, nearly 50 years later. And John Carpenter is one of my favourite movie directors and creators. While many will herald Hitchcock as the master of suspense, I think it is bad that Carpenter is so overlooked when he can give us something like this that will really scare the pants off you!

It is very easy to create violence on screen but it is very difficult to do it convincingly and Carpenter has an uncanny skill in doing so. There is the great use of foregrounds in his compisitions and those who love thrillers will know how important that is to making a good scare. The camera establishes the shot before it pans around and we something looming up in the foreground. It is normaly a bush or tree but not always and it is interesting to see how he paints his victims. They all feel like oridinary people, no one special and it certainly doesn't feel like there is one big star who will survive because she is a big name in Hollywood. And the performances are all the more believable for that, the movie is carefully painted before the monster then enters the frame.

We all see movies for a lot of reasons. Some of us want to be ammused, some astonished and sometimes we want to be scared. And if you don't want to have a really scary time, then Halloween is certainly not one for you. But if you want to, then I urge you to seek it out...