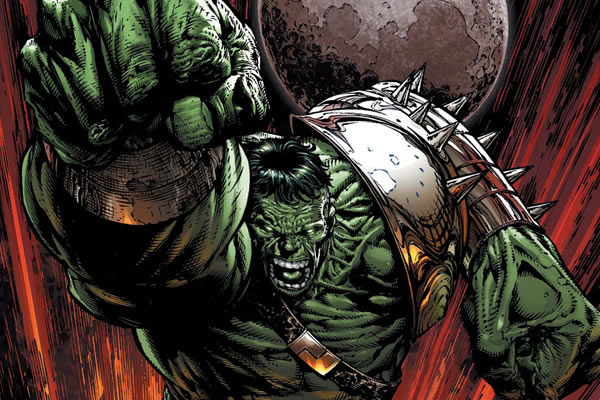 Scanning my shelves, I have recently discovered I don't really have much in the way of Hulk related material. But then the Hulk has always been one of those strange characters in comics that I just don't care about enough and as a result, I've never really read much of his tales. That was until a little while ago when I received a graphic novel of his on my birthday. It features the Hulk tearing through the universe of Marvel's heroes. I refer, of course, to World War Hulk.

Now, if your into comics, you'll have heard of this one. Marvel's pitch was that Iron Man, Doctor Strange, Mr. Fantastic and Black Bolt, blasted the Hulk to a distant planet to save the Earth from his rampages. Escaping his exile following an accident which destroys his new wife and unborn baby, Hulk returns home to enact revenge. It only ends when someone as powerful as him decides to throw down.

It was a simple concept at the time but one that was a welcome relief following the overly complicated Civil War event. WWH comes back to basics with a group of random heroes teaming up to fight one enemy. It is a shame though that Marvel didn't stick to that and had a series of one-on-ones where the Hulk beats them all. And the result is that there isn't any tension to the fights and the Hulk seems to give up rather than be defeated. It makes the whole read a bit of a let down in the end.

I think I read this book, when it was reprinted with Panini's comics in 2010, so a second read was quite illuminating. I could only imagine what I though when I first read it, I probably ignored, forgot or glossed over the bad bits. I don't normally like art from John Romita Jr, but it didn't bother me here so that was a plus.

Around the middle of the book, there is some weird pacing issues and even though it was only a five-issue limited series, it already felt like it was one issue too long. The story rushes at the beginning and spends too long in the middle repeating itself before rushing to its conclusion. The plot also relies on The Sentry but that proves a problem because the Sentry isn't the most interesting character and no one can ever find anything interesting to do with him. He just spends much of the book sat around and ignoring the other heroes pleas for help.

But ignoring the poor pacing and the inclusion of the Sentry, there is some fun to be had with this series. Writer, Greg Pak has a damn good handle on the Hulk and his allies. He also makes the Hulk's actions seem shocking and extreme but justified, at least in his mind. Pak also has the sense to get out of the way and allow Romita Jr to draw as many double page spreads and action scenes as he wants. I imagine that if anyone else was drawing this series, it would look less great.

But the big appeal of this book is seeing the Hulk beating the hell out of things. And for that, World War Hulk must be praised...