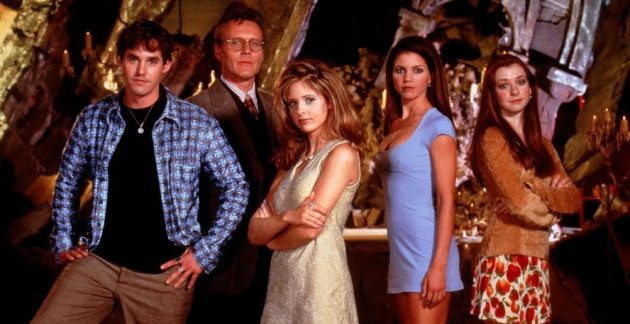 After three pretty solid instalments, Teacher's Pet is the first stupid episode of the opening series, mainly because it contributes nothing to the overall plot being set up. It just tells us that Xander is a virgin and that sex is bad, a theme that would be picked up later on down the line, with much better results.

One of Buffy's teacher's is perceptive enough to tell her that she has a first-rate-mind and that she can quickly think on her feet. But then what happens to him? He is decapitated by a giant Praying-Mantis and is then stuffed in a fridge in the cafeteria. Life isn't fair, especially in Sunnydale.

Angel is back on the scene too and this time Xander and Willow get the chance to meet him. Xander is immediately jealous so there isn't much change there, even though the still mysterious Angel doesn't do anything except stand around and look particularly handsome. But David Boreanaz has worked on his trademark scowl and look, he even gives his iconic leather jacket to Buffy.

But there are some good scenes. Mr. Flutie dithers and tells Buffy she must heal which is wonderfully in character. Cordelia tells a counsellor that a teacher doesn't need to die in order for her to loose weight and Xander daydreams he is in a leather jacket, playing in a band and rescuing an adoring Buffy from the vampires trying to kill her...