Doctor Who: The First Doctor Adventures Volume One - Review 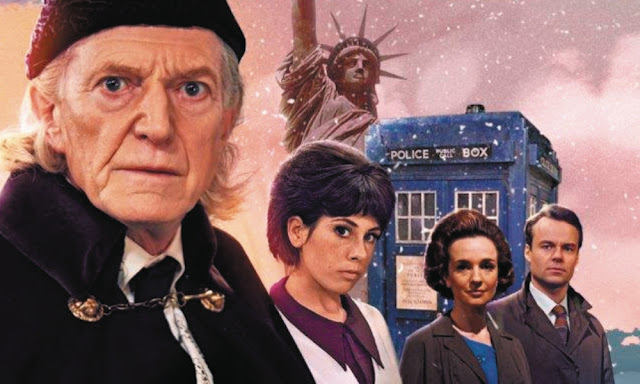 I've never been a big fan of recasting Doctor Who characters. Who is the Third Doctor other than Jon Pertwee? Big Finish's Tim Trelor is a great actor but I'd rather have him as the Doctor rather than the Third Doctor. For the most part, I've avoided the Big Finish releases with different actors, I do like Elliot Chapman as Ben Jackson though.

But I remember reading the article that said that the cast of An Adventure in Time and Space where they played William Hartnell, Carole Ann Ford, Jaqueline Hill and William Russell as The Doctor, Ian, Barbara and Susan on audio, I was intrigued. This wouldn't be a recasting just a group of accomplished actors returning the roles they played in 2013. This would allow Big Finish to do new things with old concepts, because it could have fitted in nicely between Planet of the Giants and The Dalek Invasion of Earth.

Volume One is the first of two new announced box-sets with a further one having been announced recently with the cast of AAITAS in Verity Lambert style stories. We've got the classic template of having a sci-fi adventure and a pure historical. The first story by Matt Fitton, The Destination Wars has a sixties-feel to it - with James Dreyfus putting in a performance as the Master - something that couldn't be done in 1964.

The idea of a first episode for the Master is interesting. There is an idea that the Doctor and the Master had a falling out before Terror of the Autons, so what their first encounter before that story. Unfortunately, The Destination Wars didn't quite live up to that idea though. What doesn't help is that the plotting is slightly off. What is the point of not revealing James Dreyfus is the Master until the end of the Part Two, when most of the audience have already worked out who he is? The story also doesn't do anything with him that any other story from other eras hasn't already done. He's set himself up as the leader of a planet because he needs to escape from some selfish scheme. And any Master would have been able to do that.

And this is a shame because when you think of how the Lambert era played out, the meeting of the Doctor and Master had a lot of potential. How the Doctor manipulates the Thals into fighting for him in The Daleks isn't unlike a scheme of the Master's. They might be morally different but not so much so until 1971. It would have been nice to see someone really play with the untrustworthiness of the First Doctor. The Master has to hypnotise the companions into obeying him but when you look at the early era of the show, it isn't difficult to think that Ian and Barbara would have helped the Master willingly. It would have been nice as well to hear how the Doctor and Master fell out and what his relation to Susan was. But Matt Fitton choices to ignore these points.

However, James Dreyfus is delightful as the Master, he is almost pleasant but vaguely amused by the thoughts of man. I hope we hear more from his incarnation in the future.

The Great White Hurricane however proves that 1960s historical adventures can still work in 2018. The TARDIS lands the crew in 1888 on the day a terrible snow storm hit the East Coast of America. In classic tradition, the crew is quickly split up and have to try and survive in desperate conditions until the danger has passed. The Doctor is arrested, Susan is kidnapped and Ian is injured and has to go to hospital with Barbara. Each of them has a set of adventures with the deadly backdrop.

It will never be a surprising story but it is a solid entry into the historical genre, filled with nice character moments. The Doctor's disdain at an ex-gangster's apartment and Ian and Barbara's optimism in dire circumstances. I guess this story proves that the problem with The Destination Wars was that it fell into the uncanny valley. It wanted to be different but it was too different because The Great White Hurricane proved that the staple Doctor Who plots can still work with a brand new re-cast.

The standouts of this set were definitely David Bradley and Jamie Glover as the First Doctor and Ian. Bradley is just as good here as he was on the television in the role and while he is a little more grumpy than Hartnell and doesn't have the same impish-ness, he still does a great job at being the man in charge, particularly at the end of The Destination Wars.

Glover might be nothing like William Russell who played Ian on the television, but he captures Ian's easy-going nature perfectly. Jemma Powell as Barbara might be the weakest link in the cast and while most of the time she is fine, she doesn't really capture Barbara's softer moments, such as a moment where she reassures The Doctor in The Great White Hurricane. I'm not sure how I feel about Claudia Grant as Susan, she needs a little more material before people can make up their minds. But she had decided to play it much more childish than alien, than I would have liked.

This boxset seems like a worthwhile experiment, The Great White Hurricane proves that going back to the format of 1964 still works today, even if it wasn't done in a bold direction which I had expected. It is my hope that future sets develop their identity a lot more and try some more things that wouldn't have been done in 1964...