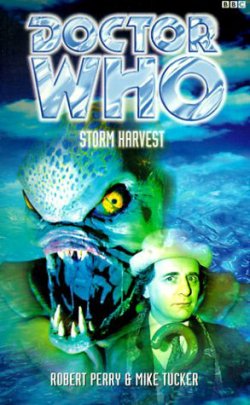 When one looks at authors' Robert Perry and Mike Tucker's previous Doctor Who books, Illegal Alien and Matrix, one of the strenghts is their vibrant portrayal of London either during the second world war or at the time of Jack the Ripper. However, when one reads these novels, you have to wonder if it is their descriptive language or the imagery you already have in you're head of the capital.

The answer to this question comes in spades in their third novel, Storm Harvest, once more featuring the Seventh Doctor and Ace. This time the action takes place on the waterworld planet of Coralee, a name which proves to be only the first in cringe-worthy exoctic names to litter this book putting one in mind of Marinus and Aridius.

The island on which the action takes place, as it is one of the few places on the planet with land, presents us with a superficially interesting local culture. It does become apparent that this is just a idyllic Earth setting that has been renamed with some extra-terrestial activities thrown in for good measure.

It is hard not to compare the vast majority of this book to Jurrassic Park, especially when the hurricane hits and destroys the colony's defensive procedures allowing the vicious Krill to invade. It is a good job that the cover gives us a rather enjoyable look at these aliens as they would almost be chilling otherwise with them being mindless killing machines and they join many of the main characters in their long absenses through segments of the book.

Also vying for attention in this book is the Sontaran-like Cythosi. In the best Seventh Doctor fashion, all sides suffer massive casualties, including some intellegent dolphins, a nice little touch I thought, many of them die too. This is a book that would send Green Peace into a meltdown!

But this brings us back to the point of this book, are Perry and Tucker capable of creating realistic settings? Well the answer is yes, but only terrestial ones. This sadly leaves a very bland and watery sense of conviction behind Storm Harvest with the sense of familiarity about this strange new alien world...