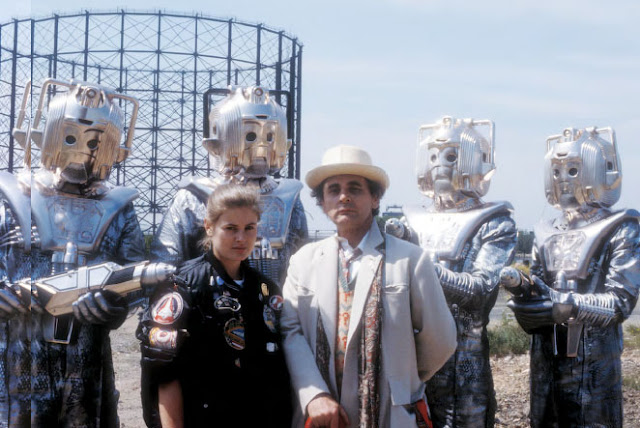 This was the story chosen to celebrate the silver anniversary of the show but god only knows why. Probably because it has the word 'silver' in it. It certainly wasn't chosen because it was any good.

Unfortunately, Silver Nemesis is pure rubbish. It is worse than bad. The whole piece looks like it was made by untalented film students. Or worse than that, untalented and drunk film students. Actually, after watching this, they might have done something better than this. It is hard to believe that the production team at the time believed this was actually a good way of celebrating the show's twenty-fifth anniversary and believed that this was a good way to give the fans a celebration. Even for a diehard fan like myself, with stories like this, it wasn't hard to see why the show was cancelled a year later.

Silver Nemesis comes across as a rehash of Remembrance of the Daleks only with Cybermen instead of Daleks. And instead of being a really brilliant story, it is just dire rubbish. The plot isn't really in it and what little there is, is so convoluted it is completely unintelligible. The Doctor is the only person who seems to know what is going on and decides not to tell anyone else, not even his companion. They then spend the rest of the story flitting around from one location to another, Windsor Castle with a cameo from a Queen Elizabeth lookalike and then lazily hanging around in the countryside doing absolutely nothing!

But what the story really suffers from is that there are far too many villains all vying for control over a weapon the Doctor sent away centuries ago. Firstly there are the Cybermen with their OTT hand gestures. While Remembrance helped the Daleks regain some credibility, Silver Nemesis takes away any that the Cybermen ever had. They are nothing short of pathetic. And although it is a cool scene, they are taken down by a teenager with a slingshot!

At least they aren't as bad as the Nazi's here. A group of guys trying to form the Fourth Reich from a transit van and who look like they would have trouble taking over a camp site, let alone a country. But all is not lost as Fiona Walker puts in an appearance and steals the whole show..