Doctor Who: The Happiness Patrol - Review 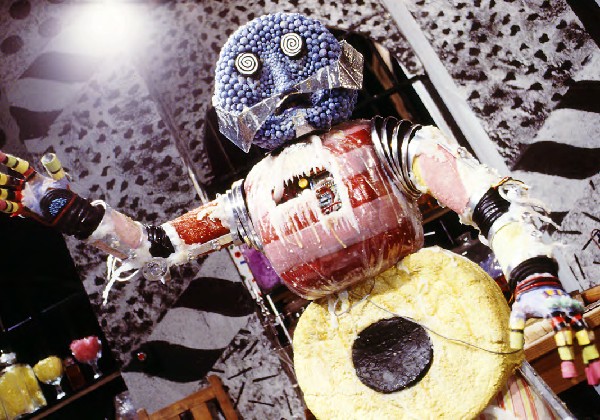 There are some people who will swear-blind that The Happiness Patrol is a masterpiece in storytelling. And I can see that there is a good political story and message hidden underneath its sour exterior. But sadly, The Happiness Patrol comes across looking cheap and horrid.

If you were to ask anyone who worked on this story, they would tell you that The Happiness Patrol was their way of taking the government, at that time ran by Margaret Thatcher and the Torries. However, on face value, there isn't much for them to be impressed about. Thatcher and her Office might be the target for Graeme Curry's script but he doesn't have anything interesting to say about them apart from how awful they were and how poor those miners were. If you look a little further down you might even see something hinting at LGBT-rights as one of the characters is wearing a pink triangle and Helen A's husband runs off with another man. And then there is Ace and Susan Q. But all the good looks at the political issues at the time get ignored.

There is no way that I would describe this to be a well-made story. The sets look like a child did them, they are incredibly cheap looking. The direction from Chris Clough is just as flat and dull as it was in Delta and the Bannermen and Dragonfire. And lets not get started on those 'action sequences', there is no way you can make a get-away on a Go-Kart look interesting.

The pacing is awful as well, even for a three-part adventure, the pacing is slow and plodding. And there isn't much in terms of plot. The Doctor turns up and realises that the population is oppressed and then runs around for the next three episodes. He then overthrows the government really quickly. And there is no danger, no tension and no hint that anyone was in any real danger. Poor Ace is lumbered with nothing to do apart from the same old capture/escape/capture/escape routine. And what does she get for her troubles? She doesn't even get the girl! Despite the obvious spark between Ace and Susan Q, Susan goes off with Earl Sigma in the end despite the pair having virtually no time on screen together.

Of course the story is most known for the Kandy Man, a giant Bertie-Bassett, something which the BBC faced legal action for at the time of broadcast. And like the story, some fans will try and tell you the Kandy Man is one of the best monsters the series ever produced. Of course, they are wrong. The Kandy Man isn't terrifying in the slightest. After all, how could you be scared of something that can be stopped by spilling a can of Sprite...