Doctor Who: The War Master - Only the Good: Review 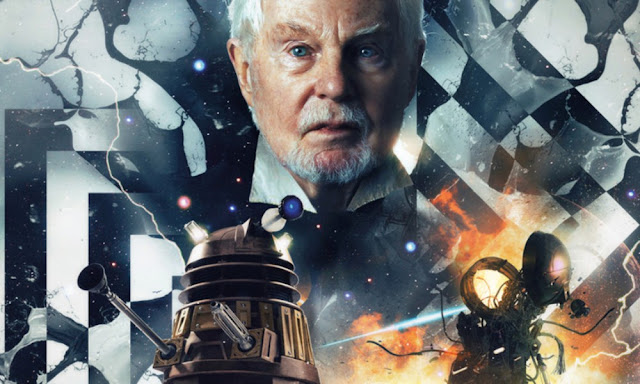 We Doctor Who fans are so lucky nowadays, not only do we get Doctor Who audios from Big Finish every month but also Torchwood, Bernice Summerfield, UNIT, Sarah Jane Smith, Counter Measures, Gallifrey and more including the recently announced Class reboot. One thing that many fans thought they would never get is a boxset about the Master and what he was doing during the Time War. But in December 2017 we got just that and more. Derek Jacobi's name was attached to it. Jacobi had previously played the Master who had lost his memories and was living as Professor Yana at the end of the universe in Utopia. Only the Good shows us what he was up to during the Time War and what lead him to the events of Utopia.

Jacobi has always been one of the best actors around, making a name for himself in BBC dramas decades ago. His version of BBC's Hamlet is widely considered the definitive rendition and I found him gloriously funny alongside Ian McKellen in Vicious. It was amazing to hear him in the opening story for the set, Beneath the Viscoid, a story that is particularly fun because it harks back to a previous release, UNIT: Dominion where the Master there too, disguised himself as a future Doctor. Jacobi pitches his performance brilliantly grabbing the idea that the Master is not too serious about being the Doctor perfectly. One of the best moments of this story is when he is trying to give a rousing speech of heroism and then trails off half way through because he's lost all interest. Other than that, Beneath the Viscoid proves to be a rather enjoyable Master VS Daleks adventure.

The following three stories, The Good Master, The Sky Man and The Heavenly Paradigm give us a loosely linked set of adventures where the Master tries to use the Time War to his own advantage with his "companion" Cole Jarnish. Out of the three, The Good Master proves to be the weakest link as it feels like a bit of rehash of the first adventure. Instead of him pretending to good, it would have been much more fascinating to see him agonising over doing something truly despicable.

But The Good Master works as a nice set up for the rest of the loose-trilogy with The Sky Man seeing Cole put through the wringer as he tries to make the universe a better place and The Heavenly Paradigm sees the Master and Cole go after a weapon to try and stop the war ravaging the universe. Both stories are excellent with big and small moments being very memorable. The Sky Man has a strong horror theme running through it while the sub-plot sees the Master trying to be a winemaker.

The Heavenly Paradigm sees the pair go to suburbia in the 1970s with a great turn from Nerys Hughes playing a doddering old grandma. Both of these stories make a great use of the Time War with weird ideas and cosmic horrors aplenty.

Of course it goes without saying that Jacobi is excellent throughout and Jonny Green is brilliant as his companion Cole. Only the Good is one of those boxsets where everything comes together excellently, even in the weaker stories. I also liked the theme tune, which was a twisted take on the original tune from the 1960s. It is excellent to hear the Master on the loose without the Doctor around to stop him and this is a particularly enjoyable and dark slice of Time War goodness...