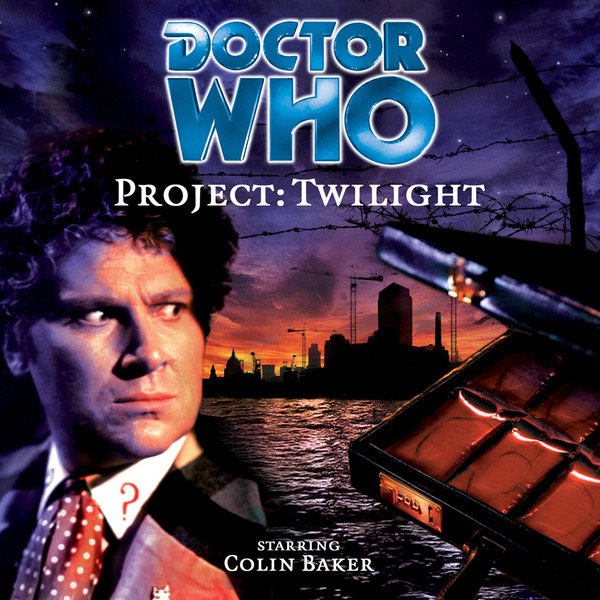 If you thought that Bloodtide was classic Doctor Who Big Finish at its best then Project Twilight drags the Sixth Doctor towards murkier waters in a no-holds barred horror which will leave you and Evelyn reaching for a hander-kerchief to mop up blood and tears.

The Doctor and Evelyn have discovered victims of a horrific government project that has been left to fester on the London docks for decades. But the Doctor doesn't have all the facts and it is growing harder for him to know which side to help. Worse still, all this is dredging up old nightmares causing him to grow snappy at Evelyn because he is so terrified. Project Twilight almost feels like a Fifth Doctor story because he is so fallible and isn't on top of the situation. This is the Sixth Doctor out of his element and he doesn't know what to do.

From their very first story, The Marian Conspiracy, it was apparent that actors, Colin Baker and Maggie Stables worked excellently together. It is clear how much of a good influence Evelyn is on the Doctor, even if he is being a bit of an idiot to her. But this story makes it clear why he is being such an idiot and even makes you sympathise with him as to why. You can hear how much the pair care about each other. That will keep you going when the grisly bits take you to your very gore limit. Something this play does on numerous occasions.

Setting the story in Southeast London gives many of the listeners a familiar setting and gives the story much more believability and terrible dangerous. The guest cast turn what could have been a conventional script into a deeply dark and disturbing listen where you fear some of them and fear for others. There are a lot of strong performances with everyone except Evelyn having something to hide.

Project: Twilight also gives us some of Big Finish's oldest plot devices, most notably introducing the Forge and Nimrod. The Forge and Nimrod would go on to appear in a number of Seventh Doctor audio adventures. I don't but a lot of people have trouble with the darker horror genre on audio but everyone must admit this is a cracking story.

Almost everything gets wrapped up but with its sequel being released a few years after this in 2001, Project: Lazarus, a few loose strings are left tantalisingly dangling...