Doctor Who: Invasion of the Cat-People - Review 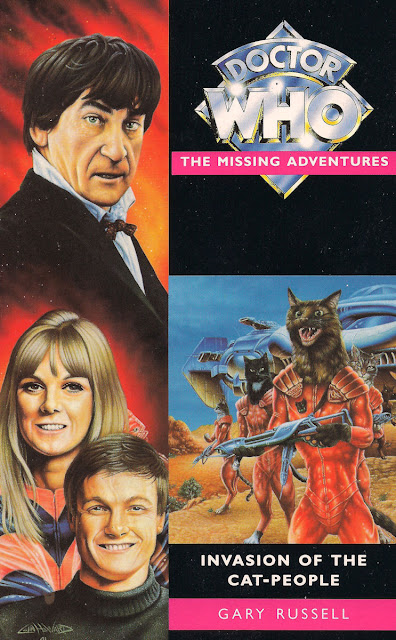 Unlike the author of this tale, I am not a big fan of cats. I like them enough, just not enough to actually have them in my house. But I am even less of a fan about Invasion of the Cat-People, a complicated tale which, I am sure, if one took the time to study the scientific elements of would actually be a breath taking piece of science-fiction. Sadly, I don't think that most of readers will be reaching for this one more than once and reading each page two of three times.

Having said that, the Patrick Troughton/Second Doctor era is one of my favourites, especially the later series' and I rate companions Ben and Polly very highly, like it seems, author Gary Russell does. It was nice that, while I couldn't keep up with most of this novel, I could be entertained by the musings of Polly's mind, we learn what she thinks of the Doctor, time travel and the TARDIS as well as learning about her former boyfriend, her friends and her supposed surname of Wright. I also liked that when she arrived in 1994, she wasn't swept up in some all-consuming adventure, as this allowed her to take stock of her extraordinary life.

Russell's portrayal of the early Second Doctor is brilliant as he looks at mannerisms that he did only fleetingly in the early years. The cosmic hobo had a very dark vein running through him and Russell manages to bring that dark streak out to the fore in his dialogue here. When I was reading his dialogue, I could easily see Troughton delivering the lines.

That is probably the highest praise that can be given to this book. That and the fact that it plays out perfectly like a six-part adventure from 1966. With a few notes from Gerry Davies this could have played out brilliantly in glorious monochrome.

Regrettably though, this isn't a book that you can sit through dutifully, it is a novel that requires you to concentrate a little too much. But I guess that is what happens when faced with something that features cat people like the ones from Survival and twenty other characters. The plot is one that will require the attention of several high ranking scientists just to understand properly and I think it is safe to say that Invasion of the Cat-People is a far cry from the Russell novels that I both expect and desire...