Doctor Who: The Dominators - Review 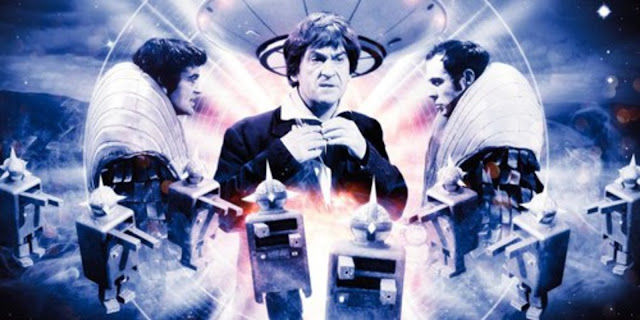 One of the great tragedies of the early years of Doctor Who is the loss of so many of its stories, since its early days. This was of course due to the fact that the BBC was so tight back in those days they wouldn't pay for new tapes so they would just record over old tapes.

Sadly it was fans of Patrick Troughton who had to suffer as their are only around seven complete stories from his era that still survive to this day. We've got something like eleven incomplete and four completely lost. It is only series six that is virtually complete, with only two incomplete stories. The Dominators was the first story of his final series.

I've been a fan of Doctor Who for as long as I can remember and I've seen the show at its absolute best and its unforgiving worst. But that might not be enough to save you from how dull The Dominators actually is.

And everything about The Dominators is sadly dull. The Dominators themselves would fail to terrify a jelly. The Quarks, their robotic servants are a stupid attempt to copy the Dalekmania that swept the nation in the early years of the show. I understand that the Dulcians are supposed to be pacifists but they just come across as spineless plodders and it is a waste of five episodes to see them sitting around arguing. Even the costumes and set are boring and the story moves along like a slow moving queue at the post-office.

The main thing that The Dominators has going for it is that it features the terrific trio of Patrick Troughton, Frazer Hines and Wendy Padbury as the Second Doctor, Jamie and Zoe. Many fans prefer the show when there is just one companion but the early years proved that trios can work just as well. After-all it isn't the quantity of the companions but the quality. Following David Tennant we had Matt Smith, Karen Gillian and Arthur Darvill. Then we had Peter Capaldi, Pearl Mackie and Matt Lucas. The short lived team of Christopher Ecccleston, Billie Piper and John Barrowman were also excellent as were Tom Baker, Elisabeth Sladen and Ian Marter.

By the time The Dominators came along, The Doctor and Jamie has established themselves as an enjoyable double act and the addition of the smug Zoe was just the icing on the cake. If you watch The Dominators, just watch it for those three...