Doctor Who: Colony in Space - Review 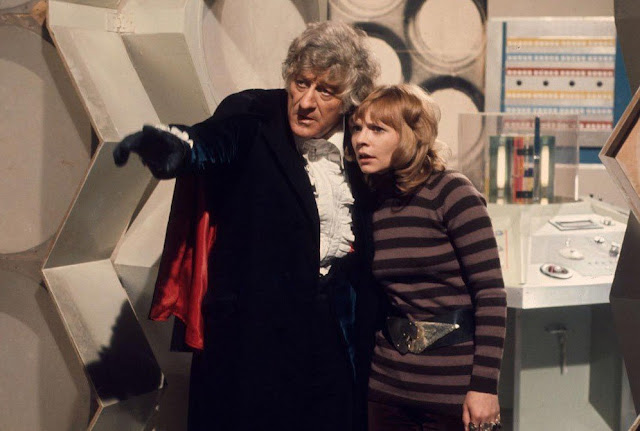 Ah quarries. What would Doctor Who be without quarries?

Colony in Space is quite an early adventure for Jo Grant and this one sees her getting whisked off to an alien planet in the TARDIS that the Time Lords have hijacked. The planet they arrive on, despite looking like a quarry in the English Countryside, might be a little on the drab side but the Doctor doesn't care, this is the first time he has been off Earth since The War Games. While he isn't exactly giddy with excitement, he is refreshingly grump-free.

Jo however has a much more human reaction to what is happening around her. Companions in the modern era have a much different one, they go off in wonder and excitement. Jo is terrified and wants to go home. Who could blame her? It is one thing to be whisked away in a out of control police-box but quite another to see your first alien planet is a drab and dreary mud pit. Its hardly the Medusa Cascade.

While the show sees the universe as the Doctor's playground, exotic alien planets just aren't doable on a BBC budget. In fact, many sci-fi shows suffer from the same problem. Any alien world looked like sun-soaked countryside of LA in Star Trek, Xena never left Greece and Stargate always looked like Canada.

But the location work isn't the only problem with Colony in Space. The script from Malcolm Hulke is a dull and plodding cowboy western that feels like an over padded mess. The first few episodes focus themselves entirely in the lives of a few colonists trying to survive while a mining group are trying to force them off the planet. It all quickly becomes tiresome as the story sees the mining group and colonists taking turns to take each other prisoner.

The mining crew, IMC, with the exception of the nice guy Caldwell, are all a bunch of thugs, lacking a lot in personality and only looking to exploit the planet for a vast profit. And as for the colonists, they are portrayed as simple farmers, people of the earth and the common clay of the new frontier. And a bunch of morons. The Doctor and Jo tell them time and again not to trust one of their members but they don't listen and then act surprised when he betrays them all.

And then the Master decides to turn up halfway through, looking like a rather glam version of Dracula. From that moment, Colony in Space becomes an even more stupid tale and it becomes about trying to stop him getting his hands on a doomsday device. At the end of the day, not even the Master can save this story. And it isn't from Roger Delgado's lack of trying...