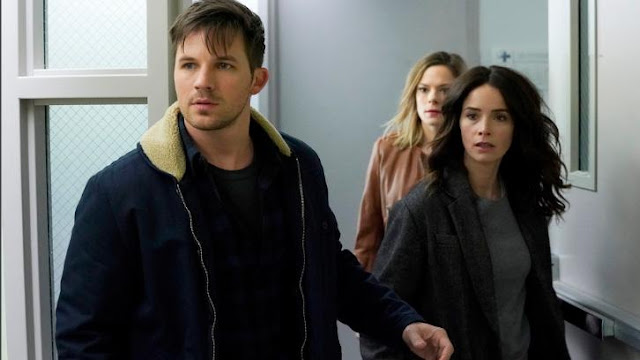 The Kennedy Curse is one of the most interesting episodes of Timeless to date, mainly because it leaves the show's premise of travelling into history behind and brings history to the future. It is a good move too because it allows the scope of the series to really have shake up and allows for brand new stories to be told. Allowing the big period setting to take a back seat and giving the characters quieter and more intimate moments means that the history lesson will become more nuanced and in some cases no doubt, will be easier to follow. Plus this episode played out as one big homage to Back to the Future so that is no bad thing either.

The writers chose the right thing to do and left the Flynn conflict with Rittenhouse in the past, letting it bookend the story and leaving a big part of it implied. It works brilliantly and allows the audience to make up what happened in the brief shootout snipped we saw and the commentary Flynn gives us at the end allows us to know what exactly happened. Imagination is an even better way of storytelling than even the written word and stranding Flynn in the 1930s allowed the show to branch out after Rufus and Wyatt brought a young JFK to the future.

Of course things go to plan and JFK escapes and he is overwhelmed by the technology of our time, his attire is questioned and there are laughs to be had when he asks to use a telephone. But it seems that JFK won't escape his fate even in the future with a murderous Emma hunting him down. He gets a little joy though when he meets a group of kids his age, they invite him to a party and he is delighted with how diverse the group is. It is a subtle reminder that it was JFK who helped pass the Civil Rights Act and it possibly the most forgotten historical fact that Timeless has given us.

Continuing in this episode is the debate between Rufus and Jiya about her visions. Rufus managed to slightly change one of her visions in the previous episode which saw him talking down his would-be murderer but the murderer died anyway. Fate still found a way to keep the outcome the same and one of the most emotional moments in this episode is when JFK finds out about the 'Kennedy Curse' that plagued his family. Now I'm not too sure how one would move past finding out that all your siblings would die in horrible ways but Rufus goes aways to trying to change it and tells JFK not to be in Dallas on the 22/11/63. His alteration to history only changes a little and JFK dies of a bullet wound in Austin instead of Dallas. Could be entirely possible that, just as Rufus knew he would die in Salem and changed it, that JFK knowing he would die in Dallas made his fate unavoidable?

Also with this episode being set in the present day, we have been treated to a better look at the love triangle between Wyatt, Jess and Lucy. It is certainly a tough situation to be involved in, especially with Wyatt and Lucy and that is likely what Rittenhouse was going for in bringing her back from the dead. So much of their feelings has to be hidden by Wyatt and Lucy because Jess is around for most of the episode but when push-comes-to-shove, Lucy steps in and asks Jess to stay around. Her selflessness is clearly painful but she has Wyatt's happiness at heart. Later on, Wyatt and Lucy agree they have no regrets and Flynn overhears their exchange. This leads to a moment where Lucy and Flynn have a beer and watch a movie in silence, both understanding why the other is there. Could this mean there is a relationship on the horizon between Flynn and Lucy? It certainly generates an interesting topic for discussion...