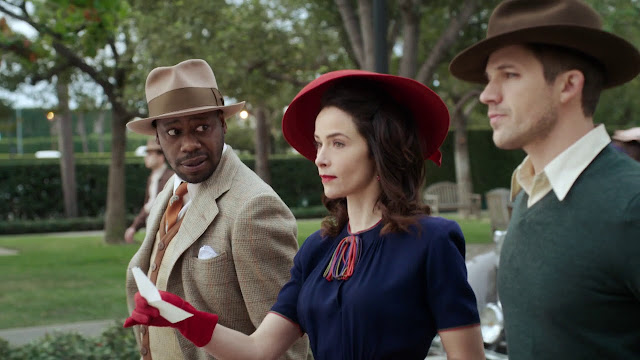 Hollywoodland sees the Time Team going back to the 1940s to recover the only copy of Citizen Kane from a Rittenhouse sleeper agent. In the process they end up teaming up with Hedy Lamarr to get it back.

Hollywoodland is by no means a stepdown from the previous few weeks. Indeed, it is a fun little story but in that fun, somethings get sorely missed. The episode sees a Rittenhouse agent trying to steal the only copy of Citizen Kane to exist at that time, one of the most influential films of all time. Before digital copies and more hard-copies could be made, only one copy of a film or television programme would be put onto film because it was so expensive to having it edited, duplicated and spliced together. Rittenhouse's plan is to take the film to William Randolph Hurst who the film is actually about. Back in 1941, Hurst was furious about the film having been made and tried to stop it from being seen.

For fans of Lucy and Wyatt, this episode came across as a dream come true and even though I love their pairing, Hollywoodland took their budding romance a little too far. Instead of allowing us to see some more of Hedy Lamarr's inventions, she basically invented Wi-Fi, Lucy and Wyatt got jiggy. Now I don't mind them focusing on the romance side of things but Lamarr is such an influential but forgotten part of history it would have been nice to see more from her. As well as being a glamourous actress, she was an inventor, creating a number of devices and gadgets that never saw the light-of-day because sadly the 1940s was still very much a man's world.

It was cool to see that this Rittenhouse agent was a film director, played by the same bloke who played Zoom on The Flash! But for an actor of his calibre, he is seriously creepy in The Flash, he is sadly underused. The episodes' writers gave him scenes with his father which saw them selling Citizen Kane to Hurst, but little was made of it.

More mystery is pilled on in the present day with Flynn being aided in his escape from prison and Jiya's visions getting more and more serious, despite a doctor's report that she is actually perfectly healthy. And a spanner is thrown into the mix with the return of Wyatt's dead wife returning. Now, I believe this is something Rittenhouse has done in order to try and take the team apart. Only time will tell...