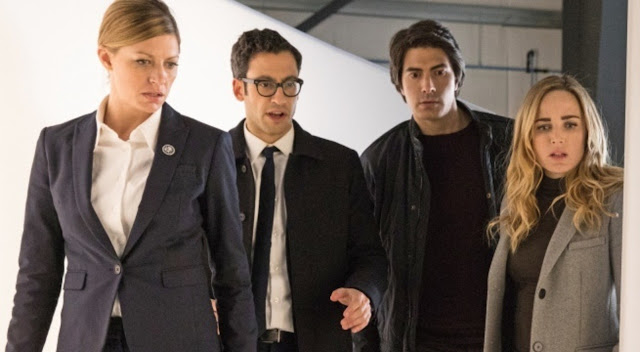 Over the past few episodes, the Legends' war with Mallus has become more and more intense. With each fight for a totem, historical misfortunes and possession, Mallus comes closer to breaking free of his temporal prison. Had that been the only problems the Legends had to fight, they might have a chance but all their personal baggage keeps on getting in their way.

The big thing about this episode is that we finally find out the secret concerning Ava. From the moment that Rip asked Gideon to delete his files on Ava, we've been wondering what is going on. Fan theories circulated the internet and I didn't know what to expect and that works best sometimes when you just don't know what you'll be getting. Until this episode, the not-knowing aspect shook up the dynamics of some of the teams members, particularly Ava, Sara, Garry and Ray. We knew it was going to be Sara and Ray uncovering the truth about Ava but Garry was a brilliant addition. Garry used to be annoying but gradually he has become not only a comic relief character but the audience's entry to the Time Bureau if Ava and Rip Hunter aren't around. The reveal of the conspiracy blows you away and the motivation to uncover it as well as the secret behind you really stuck well.

Also interesting in this episode were the scenes between Zari and Rory with the former training the latter and this was the upgrade that Rory needed to be a force against Mallus. Really, the fire totem couldn't have been given to anyone else and many would have argued against it if that had been the case. But is Rory actually teachable and would he take being a totem bearer seriously? I'm sure people didn't have much hope for him at first and this is the kind of fun that is impossible to pass up.

Nate and Wally teaming up for a totem but who they also ended up teaming up with was a surprise and it was also only a matter of time before this person turned against the Darhks and Mallus. This season has done a good job at making the villains just as interesting as the heroes. Certainly not to the point where they become to interesting and it becomes cringy but to the point where you understand the stakes for all involved. They are all involved in the action through loyalty, power or a sense of duty. And the reason this team up is so important is because it finally shows the seeds of doubt in this group of villains. But the reality check comes from Amaya with her history and how that is all to play for and how it will be the stage for Mallus's entrance.

I, Ava is another example of why Legends of Tomorrow is easily the best Arrowverse show the CW has to offer. It is packed with emotional character moments, strong character moments and a number of twists that never catered to what theories were expecting...