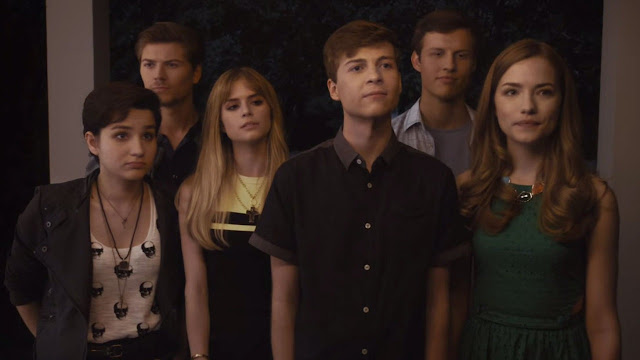 I might not be the first blogger to recommend MTV's Scream series to you. It is certainly a show which has divided television viewers but I for one, really enjoyed the series, even if I wasn't expecting too.

The basic - spoiler free - plot is this, set in a completely different universe than it's movie counterpart, the series takes place in Lakewood rather than Woodsboro. The series gives Wes Craven a mention by crediting him as the show's executive producer and the movie screenwriter, Kevin Williamson gets the, story by, credit. Really, this show is a completely different beast to the movies, so anyone should set aside their judgements at the door and just watch it. It is the most dreaded of things, another reboot of a truly beloved franchise and its also another teen MTV slasher series, so sure, your skepticism can be noted.

But this television series is everything that a reboot should aspire to be. By moving the action to the new town of Lakewood instead of Woodsboro, we get a new setting with its own blood-soaked history. Instead of Cotton Weary we are given the physically disabled Brandon James, thought long dead until someone wearing his post surgery mask starts killing teens. We also get a bunch of brand new characters: the good girl, the bad girl, the nerdy horror-know-it-all, the seriously untrustworthy boyfriend and his equally untrustworthy best friend, the journalist and the most name worthy actress who gets killed in the opening scene! And this television series feels more current than the original movie trilogy or Scream 4 ever did with emoji's, Snapchat and social media playing a huge part, rather than brick-like mobile phones and Jiffy-pop!

Everything in this show feels new, well not new, everything here has been done before, but it feels updated. And this version of Scream is exactly what it should be in both spirit and self-referential tone. With its references being taking from more modern culture for the new wave of teens who are watching it and for those adults who know what they are talking about, I had a chuckle at the Pretty Little Liars joke. In fact, Scream seems to be taking a page out of PLL's book, with the pilot opening with a string of cyber-bullying.

At one point, Noah, played by John Karna in the Jamie Kennedy role, says, "You can't do a slasher television series. Think about it. Girl and her friends at the dance, camp, the deserted town or whatever. Killer takes them out one by one. Ninety minutes later, the sun comes up and survivor girl is sitting in the back of an ambulance watching her friends get wheeled away, Slasher movies burn bright and fast."

And it is true that by expanding the series' premise to ten hour long episode does take the wind out of the series' sails a bit. The show would have certainly benefited from a few more kills, though the kills we do get are certainly brutal and the added screen-time gives our characters needed time to grieve for their losses so that they are too distracted to see the next one coming. But here, Scream succeeds where other things from the Slasher genre fails: you actually care about these kids. You don't want any of them to be killed or revealed as the killer! As much as I love a good gory death in my television shows, I found myself rooting multiple times for characters who were experiencing long winded chase sequences which deep down, I knew could only end one way.

John Karna is perfect as the horror know-it-all, he is both charming and vulnerable when he isn't throwing about his horror knowledge. Willa Fitzgerald is our good girl, our Sydney and surely it can't be a coincidence that Emma has been written with the same sense of strength and warmth as Sydney. Emma is the kind of character you want to protect but know she can protect herself. And Arrow's Bex Taylor-Klaus rounds the show's dynamic threesome off with her character, Audrey, a snarky goth girl, new to the slasher genre but not the horror genre. Even the bad girl, Brooke, played by Carlson Young, her untrustworthy boyfriend, played by Connor Weil and his dumb jock friend, Jake, played by Tom Maden, all appear to have some surprising depth.

But by the end, you can see that Noah was right, Scream, now about to begin its third season, isn't an anthology, which means that most of those kids have to survive to be terrorised all over again. I haven't started the second season yet and am pleased that many of my favourite characters have survived. But how long can that go on for? Slasher's do ultimately burn bright and fast and if we know that the majority of the main characters are going to be safe, we are going to loose some of that momentum that always burns through the best Slasher movies. Sure, our Sidney will always be safe but will any of the others?

I really love the original Scream movies, even the third and fourth entries. And for me, with its ten episode long first season, Scream: The TV Series has proved itself to be a worthy scion...