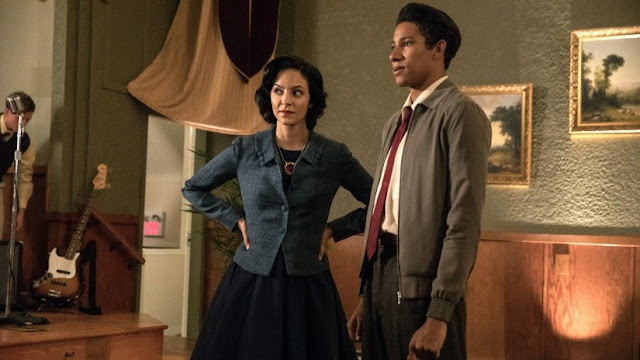 If you throw the plots for the movies Footloose and The Sixth Sense into a blender, then you have the plot outline for this episode of Legends, Amazing Grace. But this episode is more than just an opportunity to have another historical icon, in the form of Elvis Presley but it also a very effective rumination on death and the constantly changing ideals of rock and roll. Those points lead to a rather enjoyable hour of television.

I'm sure in previous episodes, I've mentioned how iffy I've found the plot of the totems in this season. But the idea of the sixth totem being the one that controls Death, attached to the guitar used by Elvis, making him a totem bearer is a pretty nifty one. And the supernatural angle made this episode really stand out amongst the crowd. We've seen episodes where the Legends go back in time to help some famous creator create something and it would have been easy to repeat the plot Raiders of the Lost Art, swap George Lucas for Elvis. But sending Elvis out to play his heart out to stop an army of the undead is a whole other ballgame.

Although the stakes never felt particularly high and that is mainly due to the lack of a real villain, unless you count Elvis' blowhard but well-meaning uncle Lucius. Maybe what this episode needed was an appearance by Damien Darhk. But that would have probably driven nothing for the plot, which is mainly just a character driven piece, kept purposefully low-key so that the writers could focus on developing some of the relationships between the characters.

And Nate and Amaya really got some development this episode. Nate's quest to save Rock and Roll felt really urgent as did his need to make Amaya understand why it meant so much to him. And as much as the climax bordered on being too cheesy for its own good, there really is a lot to be said about Elvis singing hymns to some restless spirits. As with many of the best episodes of this series, it is its silliness but heart that offsets the rather goofier elements.

What I will say though is that it was quite hard to ignore the racial hurdles in this time-period. Particularly with Nate and Amaya, it is hard to believe that a country town in 1954 would have allowed them to walk around together and attend a white church without raising any eyebrows. Of course there has always been a sense that the writers have tried to turn down the racial elements to these historical stories and I really get there. You can only delve so deeply into the racial elements before the show looses its light-hearted tone. But not even mentioning the rampant racism and segregation at play in the 1950s in Tennessee seems slightly misguided.

But moving on, it was nice to see that Mick was used in this episode. Often in this season has felt rudderless. More often than not he is used as the grumpy comic relief and not much else and the fact that the show never gave us a final hurrah for Leonard Snart/Mick Rory still stings. But what began as a simple rat chase, quickly turned into an emotional arc. It quickly became apparent that his struggle with Axl's death is a larger sign of the ever changing landscape of the Legends and how he really struggles with it. And while neither Leo and Stein were mentioned by name, their presence was seriously missed in the funeral scene.

And Amazing Grace also serves as another example of why introducing Wally West was a brilliant idea for the series. Wally fits perfectly into the team and actor, Keiynan Lonsdale has the right comedic chops to stand alongside the other actors. It was nice to see him interacting with Zari as she taught him how things were done on the Waverider and Amazing Grace works brilliantly as a look at how he will cope on this show.

I must admit though, this season of Legends has put out so many great episodes and there hasn't really been one that I haven't fully enjoyed. But Amazing Grace just falls short of being brilliant and maybe it is because there has been so much action and adventure lately, that this quieter episode doesn't really stand up to that. Or, it could be because the Darhks have been such a brilliant presence this season that an episode without them in, doesn't really work in the overall arc. It was still a brilliant episode, it was just missing a little something that the others have had...