Legends of Tomorrow: Season 3 Episode 12 - The Curse of the Earth Totem - Review 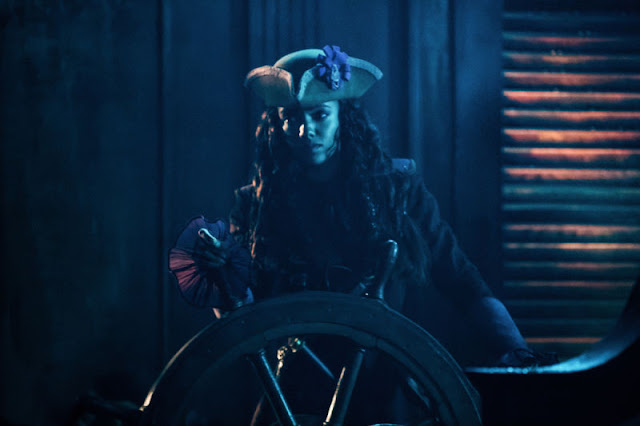 It has been great to have Legends of Tomorrow back but something has felt off about it since season 3 began. Personally, I believe the problem lies in the absence of both halves of Firestorm and it is hard to fill that kind of void overnight. And within recent weeks, the show has decided to head in more narrative driven plots and that isn't really where Legends shines at its brightest. This episode, The Curse of the Earth Totem, only serves to highlight that fact.

It was pretty obvious that eventually, a show about time-travel would go back to the golden age of Piracy and how could you not?! But one problem is that all the stupidity of the pirate-tropes are never brought to the fore. This is the kind of episode that could have played out in any time period and have stayed relatively the same. While it was fun to see Amaya getting into the spirit of things pretending to be the deadliest pirate to have ever sailed the seven-seas, but she was really the only part of this episode that seemed to embrace the fun of the swashbuckling setting. Nate and Ray did a surprising amount of standing around on the Waverider and doing nothing!

Perhaps the best thing about this episode was the appearance of Black Beard himself, played by Desperate Housewives alum, Jonathan Cake. I really appreciated that his character was just played for laughs and didn't go anywhere near the stereotypical route of making him the fearsome villain he certainly was in real life. He was an imbecile only interested in helping the Legends because it meant he could save his own skin. Cake's performance tapped nicely into that too and you got a real sense that was actually a well-bred and spoken Englishman before turning to piracy.

Another problem with this episode was that its plot didn't really come into play until the very end as we got an unexpected pay-off to the whole Ray making a magic gun, plot from Daddy Darkhest. Ray's choice to use the gun on a rampaging Nora was just the shock the plot needed. A character like Ray is bright and optimistic and so, knowing he probably killed his enemy, is going to put him into an interesting place narratively speaking. And as for the inclusion of Damien Darkh, well, I'm always happy to see a more vulnerable side to him, especially when he is forced to face the fact he might loose the only person he can spend eternity with. But in killing Nora, that would cut her story-arc very short indeed and her death would be a bigger disappointment at the moment, especially as we are getting more development out of Mallus's aids than the big baddie himself.

But, where the main plot left lots to be desired, the two sub-plots worked brilliantly. I really enjoyed seeing Sara and Ava getting closer when they went on their first date. But, as we all know in the world of superheroes, normality never, ever goes well. Actresses, Caity Lotz and Jes Macallan have developed a really clear chemistry over the course of the season and as it grows, it is continuing to be a real benefit for the show.

The second sub-plot concerned Rip-Hunter and Wally West and was designed to bring Wally into the fold of the Legends. I am far from the first person to see The Flash's loss as Legends' gain. The producers on The Flash never knew what to do with Wally and that was only made even more apparent with Season 4. But Wally's transition to Legends feels much more fitting to the character. Lets not forget that the Legends are a team where misfits gather to become something much more.

And it is extremely telling that only with five-minutes of total screen time in this episode, Wally feels much more vibrant than he ever did on The Flash. Perhaps it is because the sillier tone of the series has allowed actor, Keiynan Lonsdale to tap into his inner comedian a little bit more. The little karaoke trip between Wally and Rip singing Careless Whisper by George Michael is a perfect example of why I love this show so much, it has a willingness to embrace a more silly side for characters, even if they don't have anything to do with the plot.

Of course, it is too early to say if Wally will become a vital new member for the team as we haven't seen him interact with the rest of them yet, but it really does feel like he has found his place in the Arrowverse. Maybe Legends has finally found its missing piece to replace Firestorm...