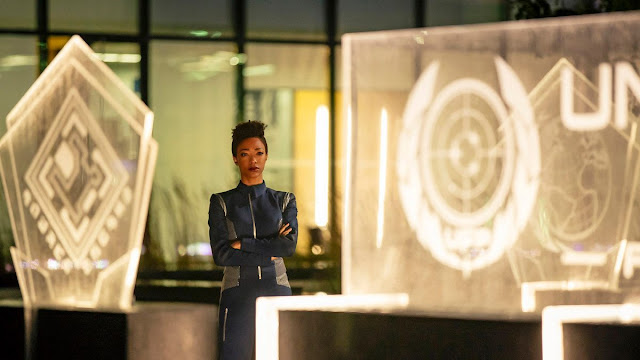 Will You Take My Hand? sees Burnham and company get kitted up in their best black leather for a top secret mission to the Klingon home-world!

I remember when Discovery first aired its early episodes, I couldn't shake the feeling that this wasn't something that really belonged in the Star Trek franchise. Now, I enjoy dark and gritty television but those shows should exist in their own right. But dark and gritty isn't what Star Trek is, it is about idealism. Its about imagining a better world and daring to hope that someday we might achieve it, even though in these times that seems to slip further and further away.

Certainly in its early days, Discovery tried to dodge around that idealism and while many fans were excited for this new direction it was also true that Gene Roddenberry's original view for the show, a bright new world with humans who have moved behind jealousy and hatred work together to explore the cosmos could at times be a bit of bar to the face for enjoyable character drama. Some things needed to change. And no matter how much I enjoyed Discovery, sometimes by going too into dark and gritty storytelling meant that it became something that wasn't Star Trek.

But over the course of the previous few episodes, Discovery seems to have made the move to go back to those old roots of the show. Saru's speech to the crew was brilliant a few episodes ago. And then there was the revelation that Lorca was actually from an alternate time line, further proof that Star Trek hadn't gone too dark, he was just a one off.

And then we get this season finale which is a really lovely statement on where the show will go from next time. Did they pull that final move out of the backsides, well yes. Did it feel a little bit like a course correction? Yes. Was it cheesy? Yes. But did I care about any of that? NO! Discovery finally embraced what it meant to be Star Trek, it finally feels like it should exist in the Star Trek continuity and that is what I really wanted. Burnham got a brilliant speech about the Federation and I love that Saru is finally beginning to stand up for his ideals more and more.

Now, this episode was a bit rushed and didn't really stand up to the action that was found in What's Past is Prologue but it was pretty awesome anyway. Seeing the daily life on Qo'noS was brilliant, strange that it was full of the green skinned dancing Orion girls and boys, something the show did to take that species away from just the male gaze. It was good fun. Burnham and Tilly's friendship is great too, reminding me of the friendship between Troi and Crusher in The Next Generation. It was just a shame that Stamets didn't really get much to do besides say a couple of lines.

Admiral Cornwell's determination to commit genocide to stop the Klingons was obviously done to keep the gritty tone the show had but in the tradition of Captain Kirk, Burnham managed to find a way out of a no-win situation, almost like the Kobayashi Maru was made real.

And then there was the ending. Now, Discovery hasn't always been good with following up plot threats that it has left hanging in the previous episodes. Using the spore-drive, the crew could have lost in multiple dimensions, or over shot by 90 years instead of 9 months and arrived in a universe after Voyager. It could have gone back to exploration, an aspect that Discovery does seem to have turned it back on. That is what I watch Star Trek to see but it is something Discovery has refused to do.

But I can forgive it for this because of the way the final moments set up Season 2. The moment I saw the second ship's number appearing on screen I knew exactly what it was. It explains why Spock wasn't at his sister's commendation - he is presumably on a mission with Captain Pike before the events of The Menagerie. I don't really know where they are going to go with this but the moment the Enterprise turned up and the show closed with the original theme, my geeky little heart was screaming!! It was the Enterprise!