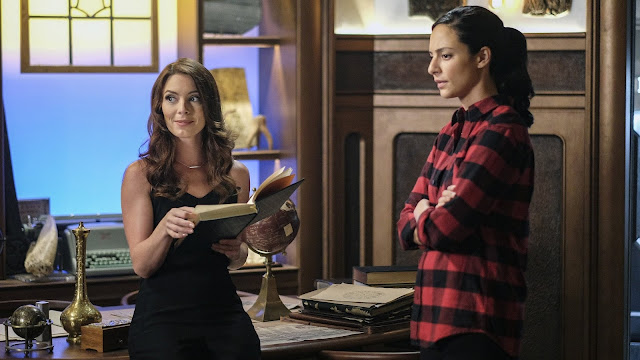 In a multitude of different ways, the third season of Legends is shaping up to be as interesting as its first. But there are also a couple of ways this season also doesn't shape up to the show's debut and one of them is the teams dynamic. Beyond the loss of Firestorm and Captain Cold and the unexciting entry for Zari, the team isn't quite the same dysfunctional but well-oiled machine they were over the past two years. Here I Go Again is clearly aimed at rectifying that and bringing Zari into the team a lot more and while Zari may never be the most interesting member of the team, she certainly benefits from being pushed to the forefront here.

Nate puts it perfectly when he says he's astonished its taken the team this long to find themselves trapped in a time loop. Of course, this episode takes a lot from the original Groundhog Day movie, and this episode wears its influence very openly on its sleeve.

The time loop element spiced up what would have otherwise been a pretty bland entry into the show. Ignoring all attempts and purposes, this is a bottle episode, a way for the producers to save money on the show by keeping the story set in one location, in this case - The Waverider. And a bottle episode will usually tell the story from the point of view of one character. What is disappointing though is that we never got to see that mission gone wrong when they all had to dress up as Abba, which is a pity.

It is needless to say that Here I Go Again didn't do anything to move the overreaching plot for the season but one has to remember that Legends of Tomorrow is often better with these goofier tales. Look at Phone Home and while Here I Go Again wasn't a patch on that episode, it is the perfect example of the teams dysfunctionality being showcased instead.

The best highlight of this episode was seeing the team through Zari's eyes and watching her coming to terms with the relationship she has with each member. Mick has always been the comic relief on the show but it is always great when we see the softer and more sensitive side to the gruff man. And it seems fitting that the man is incapable of expressing his feelings to his teammates but can put them down in the form of an erotic sci-fi novel. And it is a hoot to see Sara and Ava growing closer, both actresses, Caity Lotz and Jes Macallan have built a very strong chemistry over the course of a few episodes and hopefully Macallan will start to play a bigger role in the series soon.

Here I Go Again did succeed at making Zari a bigger member of the team, even if she isn't quite like how I would like her to be as a character. I think that maybe the problem have with her character does lie a lot more in Tala Ashe's performance, she has a much more subdued energy than the rest of the cast, and while that's fine by me, it does seem to be an intentional choice, if the character was a little more sarcastic and little more disaffected, then she would work better.

But, having said that, this episode does allow Ashe to branch out and get to grips with her character. Zari's struggles over this episode allow her to experience confusion, annoyance, bliss and weary resignation. So it was nice to see her goofier side for a change as well as her raw, emotional side. Perhaps the key to her character is for Ashe to bring out a little more emotion in Zari.

The one thing that did perhaps really hurt this episode was that the time loop was only 1hr instead of 24, it doesn't give the writers too much room to do anything in. Half the fun lies in seeing the same scenes repeated over and over with small variations each time but beyond Sara's stern words and Ray's fall, there isn't much repetition and one feels more could have been done on that front. And the last minute twist involving Gideon seems a little unnecessary. Perhaps that was because it was never made clear why this simulation made the conflict more meaningful or significant. If it did anything, it robbed Zari of her moment when she sacrifices herself the team she has come to love. It is always a treat to see actress Amy Pemberton in human form as Gideon, I'm not sure her making an in-person appearance was worth the sacrifices that were made for it...