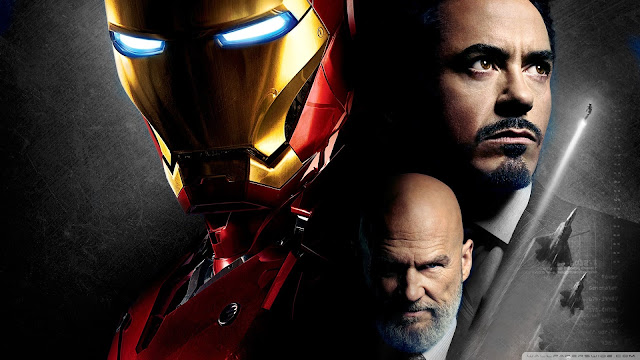 Comic book to movie franchises very often sag under the weight of origin stories, establishing conflict between heroes and the villains while introducing the roster of iconic characters already familiar to the long-term fans of the source material while making them accessible for the new audience. And that is a lot of exposition for any movie to handle.

Iron Man, directed by Jon Favereau wrestles with these responsibilities while dealing with the new conundrum, how do you make an audience care about a character who spends much of his time under a metal suit? But the producer's answer was to cast Robert Downey-Jr in the lead role and to keep him out of the suit for as long as possible.

Downey leads the movie as the billionaire-playboy, Tony Stark, who leads a life untroubled by reflection until he is taken prisoner by a group of Afghanistan terrorists using his company's weapons. Managing to escape by making a crude and cumbersome suit, based on his original comic book appearance, Stark returns home to perfect a flying suit while announcing his company will no longer be in the weapons industry. By doing this, he makes himself an even bigger target from rivals including his father-figure, played by Jeff Bridges.

Iron Man delights in taking its time to get Stark into the iconic suit and it only doles out the big action sequences once man has conquered machine. And Downey is so much fun as Stark that is a little shame they spent so long making Stark brood.

Like Ang Lee's Hulk from 2003, Iron Man is a comic book adaptation characterised as much by hard-hitting acting, intellectual concerns and the misuse of power as it is by the usual comic book foolishness. But, unlike Hulk, Iron Man finds a way of delivering all these aspects, thanks largely to Downey, a great actor who is also a brilliant entertainer. His relationship with the fire-extinguishing robot is funnier than most relationships between characters in movies and the chemistry between himself and his love interest/assistant, Pepper Pots, played by Gwyneth Paltrow is marvellous.

By getting all the usual exposition out of the way in a quick fashion that is no less entertaining, Favreau managed to create a way for some more fun in the future movies. Iron Man kick-started the Marvel Cinematic Universe in stellar fashion and it made the idea of sequels and spin-offs feel like a real treat instead of a threat. This is sterling stuff...