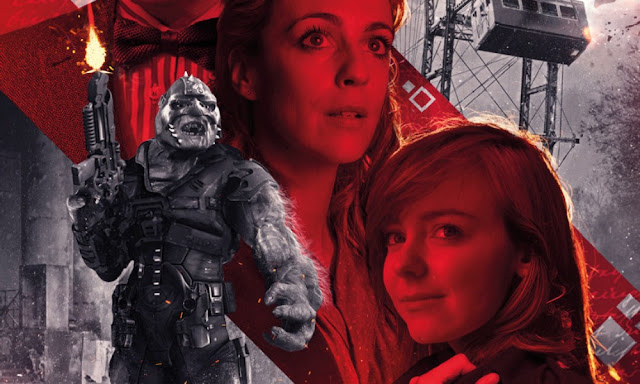 The CD Extras for Quicksilver are perhaps inadequate because they manage to fail to explain the story's biggest draw. Listening to the writer, Matt Fitton talk about the thought process about this story seems to result in something like, "Well, I just decided to throw Flip into a story that was about Constance facing something very emotional in post-war Vienna." But Flip really doesn't belong in the story.

It is no secret that I wasn't the biggest fan of Flip when she first appeared in The Crimes of Thomas Brewster. And as enthusiastic as actress, Lisa Greenwood was about the character, it didn't dawn on me that this type of character could possibly a companion. In fact, had I not known that she would go on to be the next Sixth Doctor companion, I don't think I would have even remembered the character's name. I haven't heard her proper introduction in The Curse of Davros, but I did hear her in The Sixth Doctor - The Last Adventure and Vortex Ice/Cortex Fire but she never elevated herself above anything other than average for me.

Looking back at The Last Adventure, I was full of praise for the Doctor's next companion, Constance Clarke, played by Miranda Raison. She was the return to form for brilliant Big Finish companions, something that hadn't been seen since Evelyn, Erimem and Hex. She was brilliant in Criss-Cross which was part of an average trilogy.

But all this ties back to Quicksilver, the final story in the second Constance trilogy, following Order of the Daleks and Absolute Power. The Doctor has agreed to take her back to her time because she feels guilty about flirting with some guy in the previous story, given she is a married woman, even if her husband is missing in action. And we discover on the last day she saw him he was guilty of infidelity. But before the Doctor can say his goodbyes to his latest companion, aliens turn up and Constance joins the Doctor on one final trip to Vienna to solve the problem and for whatever contrived reason, Flip finds herself transported back in time just after her wedding in what is a brilliant cliff-hanger.

One does has to wonder why the combination of Matt Fitton and Alan Barnes did this as it seems very random and arbitrary to take one of Big Finish's less developed companions and join her with a companion who has the potential to be truly brilliant even if her stories have been less than stellar.

But whatever the answer is, the whole thing really works. As it turns out all these companions needed was each other. And the best scenes in Quicksilver revolve around the pair of them. Miranda Raison and Lisa Greenwood spark off each other instantly, there is a proper upper-class 1940s woman and the flippant working class 2010's woman, one is full of respect for authority and one isn't. Brilliantly simple jokes are made by the way the pair talk to each other and basic misunderstandings become brilliant comedic moments. Its brilliant and fun and turns out to be the spark both characters needed. Luckily this spark has been maintained in more recent stories and it has solved the difficulties both characters had.

While I said that all the best scenes have the two companions in it, that isn't strictly true. There is also some very raw human emotions with Constance's relationship with her husband and given this great material Raison really rises to the occasion. Hearing the always collected Constance begin to unravel is surprisingly affecting.

If anyone has been sceptical about Flip or Constance, then I urge you to check this story out, it really is the beginning of a wonderful friendship...