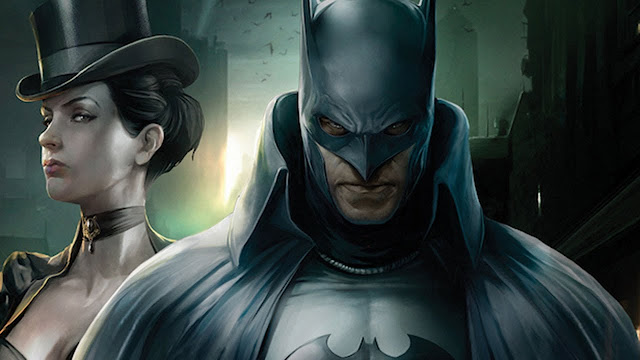 Long before the Elseworlds imprint came to DC Comics, there was Gotham by Gaslight, a look at the world of Batman in Victorian times. It saw a Victorian Bruce Wayne taking on Jack the Ripper and it followed the Elseworld's way of incorporating different heroes and villains of the Batman mythos to create new and interesting stories.

Directed by Sam Liu, Gotham by Gaslight is a very briskly paced 78 minute movie adapted from a couple of stories of the original source material. The film succeeds at recreating the tone of those comics but also a number of new flourishes to keep things interesting. Visually, this movie goes for a more steampunk tone and plays with the use of dark and shadows. It is the most visually unique animated movie from DC for quite some time and the killer reveal will have you wanting to rewatch it far more than just once.

Fans of those Elseworld comics hoping to see something from them in this will be very disappointed. The production team stuck very close to the original source material while adding original plot points. There are cameos from DC characters, impressive action sequences and the link between the Gotham world fair and the H.H. Holmes serial killer was brilliant. The reveal of Jack the Ripper's identity was brilliantly different from the comics, being someone else entirely and I'm surprised they went for such a bold move here. It is sure to invoke some divisive opinions.

There is a lot going for this movie, it might seem at first just an opportunity to get Batman, Harley Quinn, Lee Tompkins, Jim Gordon, Poison Ivy, Alfred, all the Robins and Harvey Bullock all in the same movie but they are all well served by the Victorian setting. Luckily the humour is spot on both character wise and location wise. And it isn't overdone but rather serves to highlight some awkward moments and character beats. And when it comes to its action, Gotham by Gaslight has some of my favourite sequences ever, while Batman has his utility belt, they are steampunk and not a scratch on his modern one. In other words, he has resort to his wits most of the time, and he gets his ass-handed to him sometimes! And this Batman is far less capable than other incarnations, while he takes down villains like Big Bill and Cyrus Gold, when he faces the Ripper, he struggles badly.

But not everything was perfect about this movie, for those of you expecting some Sherlock Holmes type detective skills, you'll be disappointed. Much of Batman's great detecting has yet to make it to the screen. In the comic Bruce Wayne has to work out who the killer is while clearing his name for the crimes, but here it feels like his intelligence is dumbed down a lot. While there are the occasional nods to the Sherlock Holmes stories, that is as far as it goes. So if you come to this looking for a great detective story then you'd perhaps look elsewhere.

That isn't saying that the movie doesn't work as a mystery for the viewers, even though Batman couldn't figure the mystery out until the end, eagle eyed viewers should have been able work out the killer's real identity. It is a rare piece of storytelling that makes you want to watch again, the clues are all there and dotted throughout the film if you can pick up on them, but they are subtle and that is what makes this mystery so interesting.

At the end of the day though, Gotham by Gaslight is visually interesting, action packed and works as a satisfying mystery to try and solve. It is worth adding to you DC Animated Movie collection and is worth revisiting when you need a different take on Bruce Wayne and the Batman mythos...