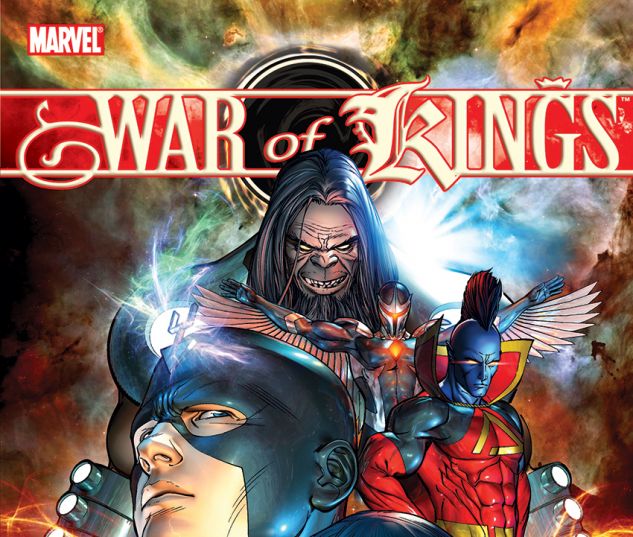 War of Kings was certainly one of the better things to come out of Secret Invasion. But looking past the prologue comic, War of Kings: Secret Invasion, this wasn't a story that wanted to be tied into yet another crossover event. Instead, it dared to be a space epic a story about intersteller war and pollitics, told with the same kind of wit and charm by Dan Abnett and Andy Lanning always bring to their works. Tying into the Secret Invasion event only served, at any rate, to highlight the differences between the two stories and it also told us how to do a big story like this kind with more skill and grace than Secret Invasion could have ever hoped to accomplish.

The Shi'ar Empire is a Marvel property I've never fully understood. How they could tie in with the X-Men to such an extent has never really felt right to me. And the attempts to tell space operas in that kind of framework had begun to feel tired and worn out. It is a credit then that I cared more about them in this story than any other one written by Chris Claremont, Ed Brubaker or Grant Morrison. They all feel a little more well rounded and human and even Gladiator, feels a lot more relatable here.

At the same time, the writing pair have also managed to restore the reputation of the Inhumans. One of the reasons that Abnett and Lanning are so good at telling Marvel's cosmic adventures is because they know how to rummage around in the sandbox and pull out things that need mending or reworking. And it also helps that the pair can add elements of tragedy to their storytelling. Alright they are playing with silly looking aliens and they never take themselves too seriously, like Rocket Racoon trying to subdue Gladiator with a mop, but there is a classical sense of something playing out.

What I liked was that in the back of the paperback, the writers allude to this being something akin to the seveties BBC series, I, Claudius, which was an adaptation of the book. While this might sound a little pretentious it certainly helps to set the mood. The politics that are playing out, from the Inhuman invasion of Kree space through to Lilandra's attempt at restoring legal authority, all feel doomed to failure no matter how grand it may all feel. It also as an epic feel to it while never feeling impersonal. Its a sweeping saga that, despite everyone involved's best intentions, will have devistating consequences.

Though the pair might seem a little bit revisionist with some of the characters like Darkhawk, they do manage to make those elements feel fresh and new again. Some of their ideas, like taking the Inhumans to the Kree homeworld, are so straight forward that it is a wonder no one has done it before. As such a concept which had previously run the risk of becoming stale, like Black Bolt being reduced to serving as an interuption for the Hulk in World War Hulk and being kidnapped by the Skrulls in Secret Invasion, suddenly become exciting again.

At its heart though, War of Kings is the story of Israel. It is the story of those who are persecuted and victimised deciding to stake a claim for themselves and their neighbours getting deeply angry. The Inhumans are the victimised corner of the Marvel Universe, not as much as the X-Men though, originally they were introduced as the victims of alien experimentation and then suffered indignaty after indignity. Crystal makes their stance perfectly clear when she says that the Inhumans are not going to be victims any longer.

But the conflict in this story isn't just one powered by politics but bloodlust. Emperor Vulcan who launches an attack on his new neighbours based on a violation he percieved as an invitation. He doesn't want his enemies to surrender, not does he want to claim their sector of space. He says at one point that he is going to wipe everyone out in that sector, advocating genocide and the desire to wipe his opponants out completely.

Though the Shi'ar empire resembles that of ancient Rome, it also serves as an interesting parable on the states that surround Israel. The Fraternity of Raptors has an almost religious underpinning. And this is nothing of the fundilmentalist devotion required of all in the Shi'ar to Vulcan.

In fact, the invasion of Kree space seemed to reflect the Six Day War between Israel and its neighbours. In both cases, the countries and worlds were invaded on a day of a celebration, the one in this book being the marriage between. It is something designed to happen quickly and deeply, where the aggressors gain the upper-hand thanks to the element of surprise. However, in both cases, the defending nation quickly repel the invasions and increase their territorial claim.

On many levels War of Kings is a vast success and definately one of the best crossovers Marvel Comics have ever put out. It is epic, charming and engaging, it is tragic but never self-important. It is complex but never unaccessable. And much like the cosmic event that proceeded it, Annihilation, it should still be used as the template for all the future crossover events that we are subjected too nowadays...