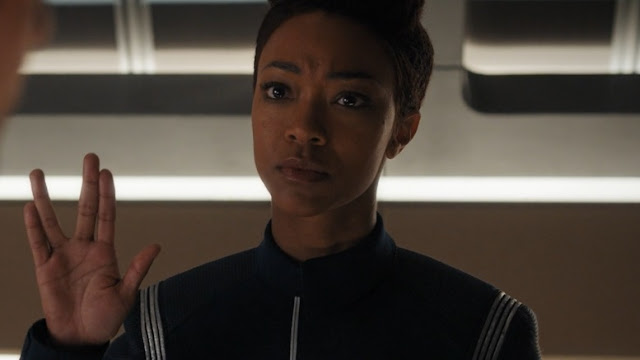 Following on from the previous episode, I was excited to see an all out epic war story between the Federation and the Klingons. But oh was I wrong. This episode felt very much like the calm before the storm and with the exception of Stamets pulling a Carol Marcus on an alien moon, very little happened. People sat around a table talking about how bad the war got in Discovery's absence, mingled with character drama and the appointment of Emperor Georgiou as the captain.

While I had hoped that the mirror universe Georgiou would stick around, I hadn't expected her to put in the captain's chair, obviously I'd underestimated how far the Federation would go to win this particular war. As the war stands, its bad but not as bad as the cliff-hanger for the previous episode would have had us believe. The Klingon Empire doesn't control the entire Federation, they have only conquered 20% of it and destroyed 30% of the fleet. While this is bad, it isn't a time travel bad thing.

The situation might not be a time travel level of bad but it is a make a deal with the devil. Or a bad deal with a bad devil. Putting someone like Emperor Georgiou in charge of the Discovery, the most advanced ship in the Federation, seemingly without anyone to keep her check isn't the best decision that anyone has ever made. But it isn't one I was entirely surprised by. It is exactly the terrible decision I would expect from the high ups in the Federation, it was run by Starfleet Admirals and Starfleet Admirals are a notoriously dodgy lot.

Sarek, (James Frain) and Admiral Cornwell, (Jayne Brook), been over.
﻿
Now, as much as I love Michelle Yeoh, I am worried this might make the series have a time loop sort of thing and not a fun one. I hope this is a one episode thing and not a season 2 change. Even if the producers go down the redemption route, I'm not sure a season of a Mirror Universe character in charge of a Prime Universe starship is going to be a good thing. Now don't get me wrong, I loved both versions of Georgiou, but I had hoped to see Saru take the captain's chair.

And I was surprised to see how quickly Tyler was excepted back into the fold. I know that Starfleet officers are supposed to be open minded and compassionate but it was odd to see how quickly they all forgave him and had lunch with him after what Voq made him do. One wonders if they would have been as forgiving had Stamets been in the room. His Klingon personality might have been gotten rid of but could there be a chance he will come back? Shouldn't he be at least confined to quarters? Letting him roam the ship, even with restrictions seems a little careless and what the hell was that scene with Michael? He's got a nerve to use that he wasn't who she thought he was and that he tried to murder her as a pretext for her ending the relationship! (God, that was confusing!) I think it most certainly fair to say that it wasn't her, it was definitely him!

Saru, (Doug Jones), proves he is best captain for Discovery.﻿

With there only being one more episode for me to watch, now works as a good time to reflect over the first season. Overall, I really loved it and I might go so far as to say that this was the best first season of any of the Star Trek spin offs. If they can just iron out some of the rough edges, it could equal The Next Generation and Deep Space Nine when they were at their best. My favourite was always Voyager but Discovery has knocked it down to second place!

The roughest edges of this series has to be the Klingon War arc though. For me, this arc hasn't worked for a multitude of different reasons but the main one is because it has never felt real. It is only something people talk about but something that we don't see up close. If they were going sell a story like this, they needed stories like Nor the Battle to the Strong, Rock and Shoals and The Siege of AR-558. When Deep Space Nine told war stories like those, they really stung because you got to see it. Hopefully in the next season, the producers will decide to shelve war stories because they obviously aren't were the series' strengths lie...