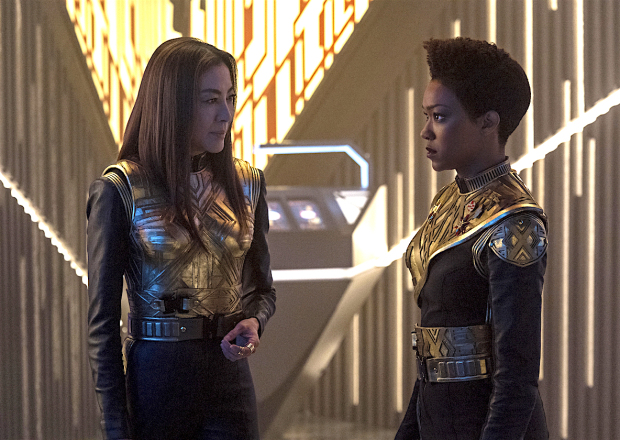 Vaulting Ambition is the third episode of Discovery to be set in the Mirror Universe. Normally, that would be exciting enough but with the major twist given to us at the end, it is hard to believe that the producers are doing any of this stuff at all!

One isn't too sure what you can say about Burnham's meeting with Emperor Georgiou, except that it was very cool and unexpected. There was the mass murder of Georgiou's security detail and they had to eat cooked Kelpian with fried threat ganglia, no wonder Burnham decided to tell Saru, that the Kelpian's didn't exist in this universe!

One of the big shocks in this episode was the reveal that Georgiou knew about the existence of the prime universe all along. And of course, she instantly believed Burnham, well, she would do anything to get her hands on a working spore-drive. 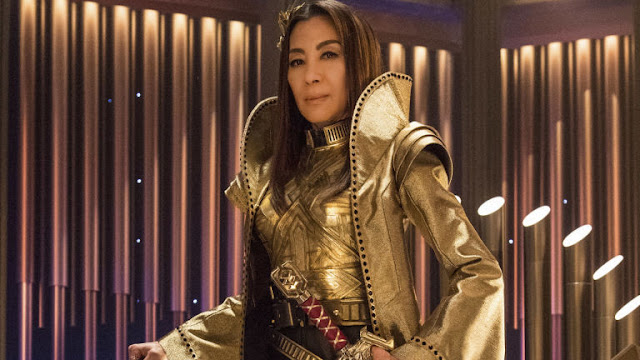 Michelle Yeoh (Emperor Georgiou), looking badass.
﻿
But the really big shock in this episode was the reveal that Lorca had been the Mirror Universe version of Lorca all along. Some fans had already speculated this so it must have been nice for them to be proven right. But it really explains why Lorca was so willing to spend so much time in the agoniser in order to get to the Emperor and it completely explained why Lorca wanted to get to Burnham and why he constantly broke the rules. And it is disgustingly cringe worthy to think that Lorca was like a father to the Mirror Burnham until he became her lover.

From the very first episode he had been introduced in, Lorca had been a dubious character with shady ideals and ways of doing things and now it all makes sense. I loved the reveal, the simplicity of it all, how it was the sensitivity to the light that all Mirror Universe people have. Especially when Burnham had mentioned the light in the previous episode.

While it might be too early to ask this question is there going to be a prime universe version of Lorca or will he be dead, possibly murdered by his counterpart?

Stamets meeting his counterpart in the Network wasn't as monumental as Lorca's reveal but it was nice. It was especially nice that it gave us a way to say goodbye to Hugh as the pair pretended to be in their quarters after a long day at work. I had tears in my eyes when Stamets kissed Hugh for the last time. But it was never explained what Hugh was in the Network. Was he real? Was he in Stamets imagination? Or is the Network some kind of afterlife?

Evil-Stamets was as corrupt as they come, having completely neglected the spores in his universe endangering the multiverse as a whole. But did the Stamets change places? If so, it might be terribly confusing but hopefully the normal Stamets will save the day.

The Ash/Voq storyline was wrapped up and explained too. It transpires that Ash Tyler was a real person who died at the battle of the binary stars, L'Rell had harvested the DNA from the dead body of Tyler and reconstructed him as the host for her lover Voq. Saru actually saves the day on this one, he goes to L'Rell and tells her that Tyler/Voq is uncontrollable, has already killed someone and is doing himself more harm than good. He even goes so far as to explain that they aren't in the real universe anymore. L'Rell then performs some kind of Vulcan mind-meld and everything gets 'fixed'.

This raises the question of if Voq is now really dead? How much of him is left? Is all that is left the genetically altered version of Tyler? Whatever the truth might be, Ash won't be able to work in security ever again...