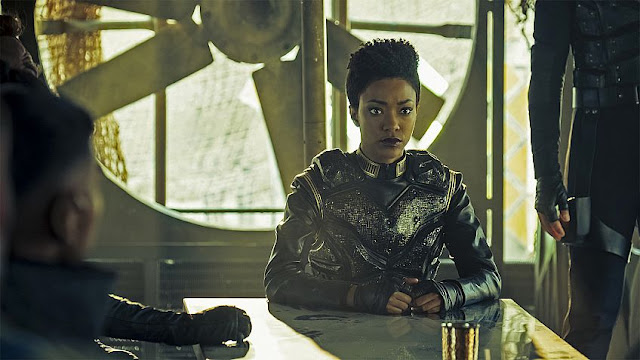 This is it, we're in the Mirror Universe properly now, The Wolf Inside is the second episode to feature in this arc and Burnham must fake being evil to save her people while the evil inside Tyler finally emerges once and for all.

If there is one thing this show should be praised for, its it continuation of exploring how emotionally devastating it would be to do what Burnham is doing. She is a good, caring human being who can't sleep because she is trapped in a waking nightmare. And to add insult to injury, it isn't as if there aren't any consequences to her masquerade as people are still being executed by transporter and she has to give the order. 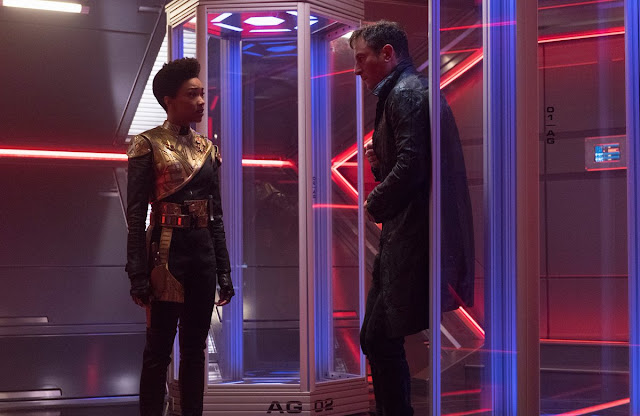 Earlier in the season, Burnham had told Tyler that the darkness waits inside everyone, completely unaware of how close to the surface his true darkness actually was. During an interesting visit to an alien colony of rebels, Tyler and Burnham come face to face with the Mirror Universe version of Voq, and Tyler literally loses his mind! Tyler was speaking Klingon before trying to kill everyone!

I am still very confused about what is going on with Tyler though. It is clear that a surgical alteration went on with him, those flashback scenes are immensely creepy and I get that Tyler contains Voq. But is Tyler still alive somewhere? Did or does Tyler even exist? Just what is going on here? If this show was an earlier version of the show, it would seem that Tyler was retrievable but in Discovery, I wouldn't be too sure. 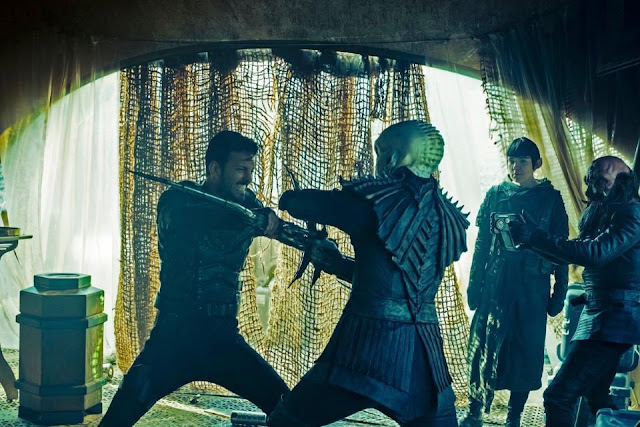 It shouldn't be a surprise that wonder-woman Burnham managed to get the data-disc with all the information on the USS. Defiant and Tyler back to the Mirror Shenzou and too Discovery with a transporter deception. I did wonder for a brief moment if that was going to be it for Tyler/Voq. And note the complexity of the Mirror Universe Voq, he is a good guy. Are the producers trying to suggest that we might actually like him once we get to know Voq? Hopefully they will wrap this storyline up with Tyler/Voq playing a big part in the peace treaty between the Federation and the Klingons.

There are plenty of other interesting moments in this episode too. I particularly liked seeing the Mirror Universe Sarek and his reaction to the mind-meld with Prime Universe Burnham. And I liked the fact that they gave Sarek a Spock-goatee. These creators do their homework! And of course the big surprise, or not if you were me who worked it out from the previous episode, was the identity reveal of the Emperor. The Emperor turns up in time to photon-torpedo the surface of the rebel's planet and cause Burnham a headache. Lets hope the rebels got out in time! I think many people had already guessed the Emperor was Georgiou.

And the B-plot in this episode was also brilliant. Tilly, still in her Captain-Killy outfit used the spores and technobabble to experiment on Stamets and try to wake him up from his coma. Its sad to think that for a while, everyone thought Stamets had unwittingly killed his own husband and it was confusing to find he had entered some crystalline world to meet his sarcastic Mirror Universe counterpart. It is exciting to think that this series might be setting up a way for our characters to travel anywhere they want too thanks to the spore-drive. That would truly take our characters where no other series has gone before...