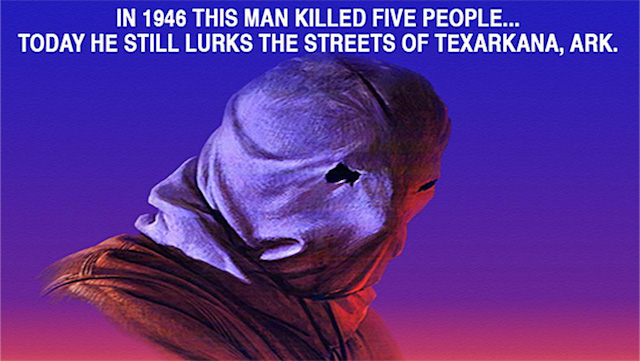 On paper, The Town that Dreaded Sundown should be one of the most chilling horror movies ever released. Recounting the true tale of a string of murders that took place in a small American town in 1946, director, Charles B. Pierce's pseudo-documentary gives us a quiet little town, haunted by murders. By day, the small town in Texas revels about the fact that the war is over, weddings and proms take place but by night, the inhabitants cower in their homes behind boarded up windows as a man wearing a burlap sack over his head roams the town in search of victims. It is the kind of movie that could have only been made at the time following a time where the country had endured some real terrors, especially for audiences in 1976 the thought of such an evil coming to their hometown was terrifying and still is.

It is just a shame that Pierce's film doesn't stick to that notion, instead we get something that is quite jarring. One moment you are watching the killer chase a group of teenagers and then watching the cops out on a disguised stake-out operation, made funnier because the dopey desk attendant didn't realise the assignment he was taking up meant he would dress up as a woman. As a result, the tonal clash stops the movie from being as unsettling as it should have been.

However, the appearances of the murderer, imaginatively nicknamed the Phantom Killer are remarkable. Even with the slasher genre still in an embryo stage, Pierce manages to construct sequences and scenes that disturb to this day. Obviously, the idea of the Phantom Killer isn't as refined as his successors in the genre, characters like Freddy, Jason and Ghostface were all a lot more polished and every scene with the Phantom Killer involves a chase sequence, but it does add to the kind of pseudo-documentary feel that Pierce was striving to grasp. Unlike the aforementioned Slasher killers above, the Phantom Killer is clumsy and his attacks are messy and elongated ordeals that lend themselves to some very dense sequences.

But whatever the Phantom Killer lacked in grace, he made up for in his creepy presence. His outward appearance would later be adapted by Jason in the Friday the 13th franchise beginning with Part 2 but for me, the Phantom Killer wore it better. While he may have earned his name from his elusiveness, his appearance helps, with his burlap sack reflecting the moonlight, giving him an eerie glow. We have numerous shots of the Phantom Killer skulking and lurking in shadows and bushes that work well because of his terrifying appearance, making them all instantly iconic. Perhaps the scariest moment of the film is when the Phantom Killer appears outside the window of a home and then opens fire of the couple inside. The film is dotted with similar effective moments which makes you wish that Pierce hadn't tried to give it a lot of obvious comedy.

But Pierce manages to make the killer a credible threat even when he isn't on screen. When he does appear, he is almost animalistic, wide eyed and heavy breathing but when he isn't around, he is still felt, walking the streets of the town as one of its citizens. Then inclusion of narration helps build the tension up and sometimes takes the feeling of a documentary away from the piece and seems to place it around a campfire. The film even doesn't technically end as the killer is never caught, though there is a very Hollywood police chase and the film even goes so far as to say that the killer from 1946 might still be around, in the viewer's home town. Luckily this is something that seemed much more relatable in 1976 than it does now!

And that is the sort of stuff the film should be up for the whole of its runtime. When it wants to be, The Town that Dreaded Sundown is the type of film that it should be, gritty and unsettling. Even the documentary feel gives it something of a different feel to similar movies, making it stand out even more, even if it didn't quite work. Part of what this film work is that it takes that nostalgia people have for the old days and throws it into the blender and for whatever reason, the final piece has an anachronistic feel to it, meaning to could have taken place in any time, any place and to anyone.

All the elements add up to make a move that mostly works, even if the sense of dread only comes from the appearances of the Phantom Killer and not the tone of the film as a whole. But it does remind us of one thing, the scariest monsters are always the real ones...