Doctor Who: The Wrong Doctors - Review 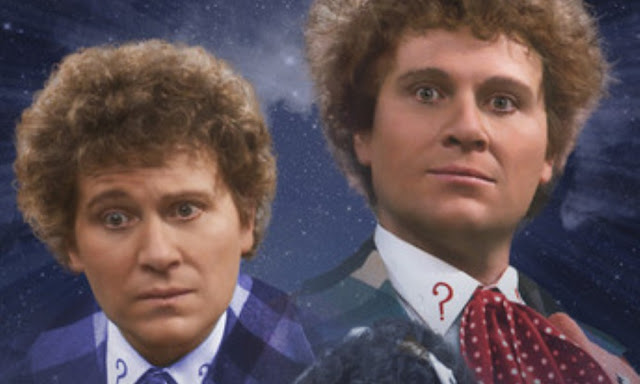 The Wrong Doctors sees two Doctors and two Melanie's arrive in 1980s Pease Pottage. But none of them fit well together. The Wrong Doctors kicked off the celebrations for the show's fiftieth anniversary for Big Finish with a multi-Doctor story with a twist. Both Doctors are the Sixth and both are played by Colin Baker. The script from Matt Fitton is a twisty one but a fun one as well. Of course, the only thing better than one Colin Baker is two Colin Baker's and both Fitton and Baker pull everything they can out of this script. But the craziness doesn't stop there, in the opening scene there is a dinosaur roaming around in the 1980s.

The story from Fitton is good fun and luckily, he doesn't rest the whole thing on the two Doctor's, there is plenty going on else where, almost too much in fact. There are time ruptures, lots of character work for Bonnie Langford's Mel, songs, evil aliens and much more. The plot begins to unspool in a way that Stephen Moffat would love and while I found myself very confused by what was going on by the end, I really enjoyed the journey there.

The Wrong Doctors marked five years since Bonnie Langford had done a Big Finish play and from her appearance here, it was long overdue. Big Finish stripped Mel of her obnoxious screaming, dimness and worse dialogue and made her into the gung-ho, enthusiastic companion that the producers in the eighties always seemed to be afraid to give us. And as usual, she is a sheer delight to listen too. Here, Mel is strong and brave and the story makes good use of her forgotten background. Langford even steps up to the challenge of playing two versions of her original character and both of them have a good rapport with their respective Doctors'. Colin Baker excels at the material he is given, even if I didn't think the contrast between his two Doctor's was as good as we are led to expect.

The Wrong Doctors also gets some impressive music from Simon Robinson. I don't remember really taking much note with his music before but here, The Wrong Doctors boasts one of the best musical scores I can remember.

Thankfully, this story is a fun one and one that shows us what our heroes are made of. But this story finally shows us Melanie Bush at her very best and I am looking forward to listening to the rest of this trilogy...