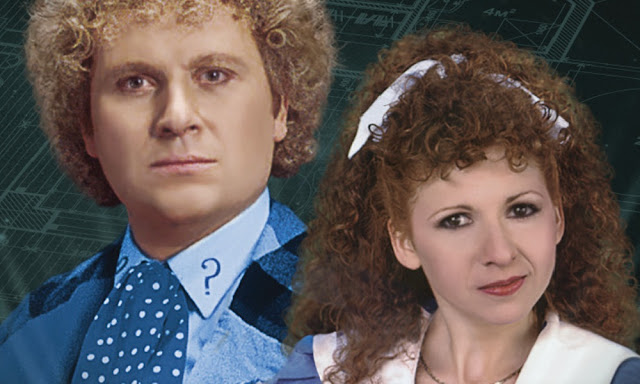 Judging from my listen and the comments in the CD extras, Spaceport Fear is easily a story that would fall into the Doctor Who story trope of a base under siege. A group of people are trapped in an isolated place with an evil trying to get inside. It is what we fans term, a 'base-under-siege' story. With this story being set in a spaceport, it is a very big, isolated place, which supports its own society which easily feels like it could settle with stories like The Face of Evil and Paradise Towers. Author, William Gallagher gives us an interesting look at this society, a people who have split into two factions, the Business Class and the Economy Class.

Perhaps the best and funniest moments in this story are those where Gallagher builds up the culture surrounding airport snobbery. The people from Economy are born in Arrivals and one of their little phrases is to ask if they have anything to declare. They can even be upgraded. Maybe it isn't the most complex of outer-space societies but it is fun and played for laughs in a way that doesn't become tired throughout the course of the play. Gallagher is also good at using the different areas of the spaceport at points throughout the story. The contents of Duty Free become important later on, as does the way one gets around the spaceport. And I really liked the way that the Doctor and Mel devised to talk to one another across distances.

The plot on the other hand feels just like window dressing, especially in the second episode when we spend the entire 25-30 minutes wandering around in dark looking for batteries for a smartphone!! We get some stuff about a war, a monster and a great deception but sometimes, I felt it was hard to be interested in any of that. I also got a little confused towards the end. I understand that the villain was lying, but what the lie was and what the motivations of the monsters were at times, more than a little confusing. Not everything about the plot is bad but this was one of those stories that should have been comfortable at being a three part adventure.

But perhaps the weakest thing about this story is its characterisation. Isabel Ray never got to convince us that she was the big focus as Naysmith and Beth Chalmers played the same character that she had done a few plays ago. The characters just felt like types of characters, not in a bad way like some audios but it was hard to be interested in any of them. On the other hand though, Ronald Pickup is brilliant as Elder Bones and there are some brilliant lines for the Doctor and Mel. Though The Wrong Doctors was a good story, this is the type of story that reminds us why the Doctor and Mel were so good together in the first place.

Everything I've just said makes it sound like I didn't like Spaceport Fear but I did. There is a charming idea at its core and was certainly an enjoyable way to spend two hours. It was just that the core could have been expanded and explored a bit more and it could have been something other than just enjoyable. It was fun but Doctor Who can so do so much than just 'fun'...