Doctor Who: The Seeds of War - Review 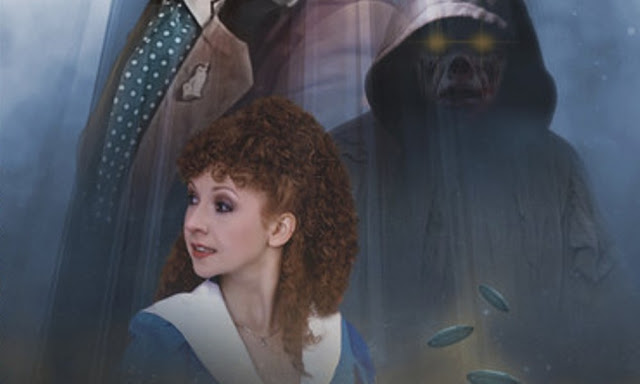 June 2014 gave us a story called Destroy the Infinite!, where the Fourth Doctor faced the Big Finish baddie, The Eminence for the first time. But the story had already received itself a sequel over a year earlier with The Seeds of War. The Sixth Doctor and Mel, looking for a nice trip on a new space-elevator, find themselves in a war zone. Earth has only just barely won against the Eminence and his Infinite Warriors. Written by Matt Fitton with a plot from Nicholas Briggs, this should have felt like the emergence of a brand new brilliant baddie. Instead, nothing about this tale gets me excited for any future Eminence tale.

It is a shame because The Seeds of War has a nice idea at its heart - the Doctor and Mel arriving after a war has concluded. This is the kind of problem that Doctor Who doesn't tackle too often and the story takes us through a number of different settings, showing the desperation and degradation of a society from many different angles. The grim tone is something the story wants you to feel rather than see and instead, it comes away feeling meandering and pointless. I'm sure there are plenty of reasons for this but I can only put it down to two.

First up is the uninspiring characters. A desperate aged scientist, his loyal daughter and son who joined the army. And now you know as much as I learnt about them over the course of two hours! They just feel like archetypes as does the world they live in and nothing is developed nicely. Even the music isn't inspiring. Without that to set the tone, a bleak story has nothing. Had this story had the music suite of The Sword of Orion or The Natural History of Fear, then maybe it would have stood a chance.

Without establishing a tone, the story just meanders and it isn't about anything. The Doctor and Mel travel around until they don't anymore. The story is good in its concept but it completely lacking in anything else. What there is of the plot doesn't come into play until the third episode and it so poorly done it is laughable. It takes a comment from the Doctor for a scientist to realise that the failure of crops can only be from the fallout of the war. Then that character wishes that there was a seed repository, Mel recites a line from some movie and the scientist remembers that there is a seed repository. And a lot of important scenes seem to happen 'off-screen' too.

And as for the Eminence, the story tries to build up the tension surrounding him by keeping him off stage for as long as possible but it only makes you wish that something was happening. Nothing about him or the Infinite Warriors make them interesting for a comeback. These monsters just snarl a lot and you can say what you like about the Daleks, at least they are interesting to listen too!

The Seeds of War has its roots embedded in a good idea and I like The Doctor and Mel trying to stay optimistic in a story that is trying to be grim. Unfortunately, the whole story is squandered by a surprisingly dull execution...