Doctor Who: The Architects of History - Review 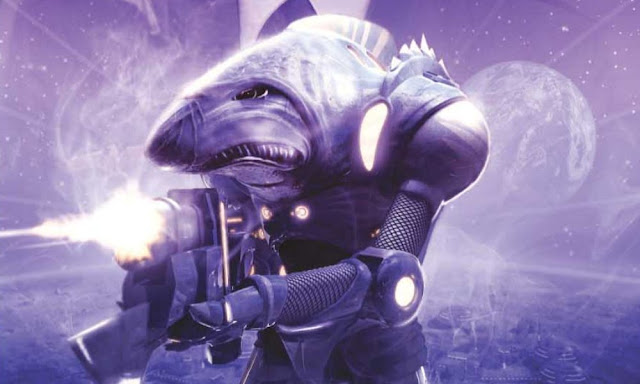 The Architects of History brings the Klein trilogy to an end and finds us some considerable time after the previous story, Survival of the Fittest. Elizabeth Klein stole the TARDIS, leaving the Seventh Doctor stranded and from then, it seems she has been a very busy little bee. Using the stolen TARDIS, Klein manages to engineer an entire facist regime and it is here that our story begins on the Moonbase in 2044.

It isn't surprising to find that there are some hairline fractures going on underneath the surface of Klein's Galactic Reich. The peace and prosperity she has brought is thanks to time travel. Is there a Dalek invasion coming? Well, you pop forward in time, grab some better weapons and your sorted. Sontarans? Go back to all the battles they lost and analyse their losing battles and take the data back to 2044.

For Klein and her officers, this is a never ending job but for her and the TARDIS, it is starting to become too much. There certainly isn't any help coming from the prisoner kept in the cells. Despite interogation, the Doctor is unwilling to divulge the TARDIS secrets. But then he can't even remember meeting Klein previously or their travels together. Or can he...

Steve Lyons has a lot to live up for with this story, especially, even though she came back later, this was to be the last story for Klein. He also populates this story with his aliens the Selachians, aliens he used in BBC books. There are secondary characters that are more than first seem and a dark tone we haven't really seen or heard since the Virgin Missing Adventures books.

The Architects of History is very well-paced and interesting enough to keep even the most casual of listeners interested throughout. The main cast of Sylvestor McCoy and Tracey Childs continue to knock them out of the park with their superb performances. Newcomers Lenora Crichlow and Ian Hayles both give great performances as characters who, at the beginning, end up being central characters to the plot.

If there is any complaint about this story is it the dark tone, especially by the time the end comes along. Although the ending scene is surprisingly upbeat, the whole story has a depressing tone to it and it says things about the character of the Doctor that fans might not want to hear. Of course, for some fans, this is the complete opposite and it isn't a turn off.

But the bottom line is that The Architects of History is a terrific story, which ties the final knot in Elizabeth Klein's story up brilliantly. But it isn't a story for the faint of heart...