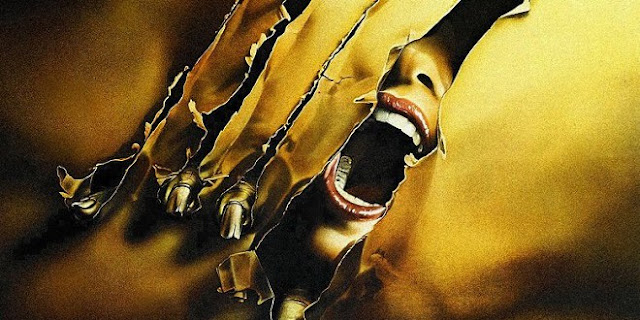 Good versus evil is always a good theme for a horror movie and in The Howling, the use of this tried and true motif, strikes pay-dirt, because the battle between good and evil takes place within the individual and within your very soul.

The Howling opens up with news reporter, Karen White, played by Dee Wallace, in the midst of a murder investigation concerning the grisly murders committed by Eddie Quist, played by Robert Picardo. The news station where she works is also running a piece on a novel by psychologist Dr. George Wagner, played by Patrick Macnee. Wagner's belief is that human behavior is grounded in the idea that humans repress their animalistic instincts and that the repression of such instincts can be damaging to the body. He seems pretty vocal about the idea of humans releasing their animal sides.

Now, if there is one thing I've learned in life it is that words have meanings behind them. 'The Colony' would instantly set me on edge as I would imagine some place where cults rule, inbreeding and a real sense of us versus them. So in this modern day and age we might wonder why the hell did they go? But we have to remember that they didn't have the internet back then, there was no online reviews from a place.

But from the time that Karen and her husband arrive, things are slightly strange. Old men try to throw themselves into fires as penance. People are far too friendly. What do the people on the island want? It turns out they are al trying to be born again, gain new lives. As wolves.

The rest of the plot focuses on the werewolves plot unfolding, the deaths of a few key people, a very racy and slightly unneccerary sex scene, silver bullets, and the escape of a few key characters, all of whom are scarred and changed.

But The Howling is a wonderful movie, it has some genuine scares and is a treat for horror and werewolf fans. But it also has a message for the viewers. Think twice if you are invited to a mysterious getaway, do not wander off by yourself, do not answer mysterious whispers in the woods and bring plenty of silver bullets...