There as been a lot of risk taking on Discovery, some of which worked and some of which didn't but this episode was pretty dammed good.

For those of you who haven't seen a lot of Star Trek in its many guises, the Mirror Universe which first introduced in the very popular Original Series episode, Mirror, Mirror, where Captain Kirk, when Kirk and some other members of the crew changed places with their mirror universe counterparts following an accident involving an ion storm and a transporter. Interestingly the Mirror Universe was designed to the counterpoint of Gene Roddenberry's original happy view of the universe. The Terran Empire is oppressive, a facist government that rules the Earth through torture and terror, with its roots possibly embedded in the Roman Empire.

While no episode of The Next Generation or Voyager are set in the Mirror Universe, Deep Space Nine visited the terrible place five times, each one done with a comedic twist, either with the counterpart of Kira, a main Ferengi character died in each episode or the entirity of The Emperor's New Cloak. The Mirror Universe only really took on its darker persona in the Enterprise two-part story, In A Mirror Darkly. That story began with an alternate ending to First Contact with Zefram Cochrame killing the Vulcans who came to see him after he acchieved the first warp flight test. It also features an evil Jonathan Archer commanding the USS. Defiant. What is confusing though, is that the Defiant is the sister ship of the Kirk/Spock Enterprise, which was believed to be lost in the Original Series episode, The Tholian Web.

Confused yet? I am and I have a good Star Trek knowledge! But it is a good job that we don't really have to follow this plot thread too much. 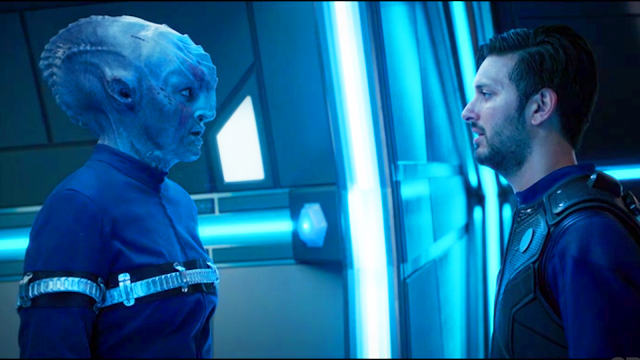 Is Tyler (Shazad Latif) really who he believes himself to be?﻿

Easily the biggest question that is going to be raised by this story is what the hell they are doing with Tyler. Whatever it is, is creepy. The graphic detail, with multiple mentions of the shortening of limbs and surgeries. Is Ash Tyler supposed to be Voq, like many fans have believed for a long time? The surgery flashbacks are far too disturbing to be dwelled on for any amounts of time. So was his letting L'Rell out of her cell and her nearly kissing him. L'Rell mentions that Tyler let what happened to him happen. But how could that possibly be?

There are certainly moments during the beginning of this episode that points to the fact that Tyler might not be who he says he is. Saru's threat ganglia went into overdrive when Tyler entered the bridge and in his catatonic state, Stamets told his husband that the enemy was here.

Oh and then he KILLS DOCTOR CULBER! It was a moment that shocked me a lot. I'm not sure how I felt about it actually. On one hand it was terribly upsetting because I really liked Stamets and Culber as a couple. It was bad enough when Lorca told him he couldn't treat his husband because he was too close but I could understand that from an objectivity point of view.

In a somewhat bittersweet turn of events, Burnham finally got be the captain of USS. Shenzhou. But like Kirk in Mirror, Mirror, she is nearly killed in short succession by the acting captain. It is a cool fight sequence and I like how she turned off the gravity for a few seconds to take the evil version of her former Shenzhou, crewmate, Conner of guard. 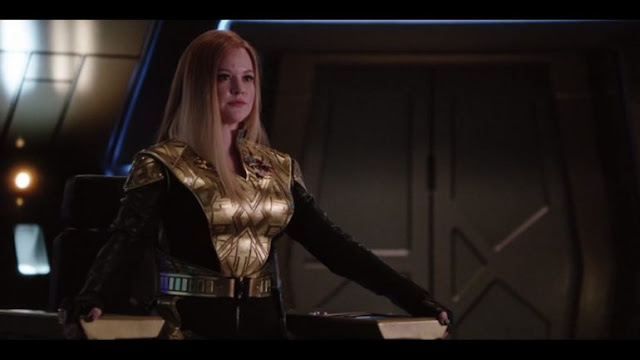 Cadet Tilly, (Mary Wiseman), takes her place in the Mirror Universe as Captain Killy.
﻿
Now, there is usually something funny about the Mirror Universe, you had Spock's beard and Archer fighting the Gorn, not to mention all the DS9 appearences but here it was Cadet Tilly, Burnham's earliest friend onboard Discovery, finding out she is the captain in of the ship in this universe. She is completed with her over-the-top costumed and dyed hair. Tilly quickly became a favourite character of mine and she obviously enjoyed being Captain Killy as she is nicknamed. But you could also see how she thought this might damage her Starfleet career. It was a brilliant move for the character.

I also loved Lorca trying to pretend he was Killy's chief engineer and putting on a Scottish accent in a deliberate nod to Scotty from the Original Series.

Speaking of Lorca, early on in the episode, he seemed happy to take the blame for what had happened to Stamets. Later Culber theorises that Lorca was to blame for what happened to Stamets and bringing them to this universe. Is that possible. Lorca has done some questionable things over the course of this season already, could it be that the agonizer booth is the best place for him right now?

As the episode came to its conclusion I was hoping that everything wouldn't be resolved in one episode. And it didn't. It raises the question of how long Discovery will stay in the Mirror Universe, how long the fans will want them to stay there? Discovery is needed back in the prime universe, especially given how the two ships have traded places. The bad Discovery is in the prime universe now, doing god-knows what, not to mention that the prime-Discovery has the data to end the Klingon war.

Lorca believes that the time-travelling Defiant will give them an out of this trouble. But I'm not too fussed about that for now, all I want is for them to bring Culber back, either as his prime-self or as his Mirror Universe counterpart. Could time-travel be the answer...