Doctor Who: The Shadow of the Scourge - Review 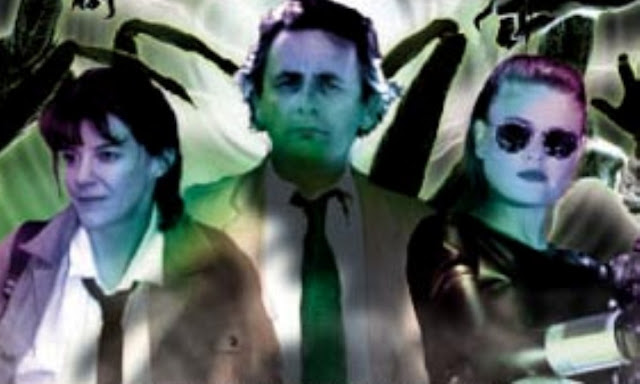 I have to be honest, The Shadow of the Scourge has always been one of my personal favourite Big Finish stories. It was the first time that Big Finish showed off their offbeat humour, something that would come back in future stories like The One Doctor, Bang-Bang-A-Boom, The Kingmaker and The Doomwood Curse, years later.

It also serves as an introduction to the character of Bernice Summerfield, who already had a spin-off series which began with the silly Paul Cornell story, Oh No It Isn't!, based on Bernice Summerfield book of the same name. This is her first appearence in a Doctor Who audio book and she is still played brilliantly by original actress, Lisa Bowerman.

"Ground floor: horror, tragedy and death," the Doctor intones at the beginning as he ushers Ace and Benny out of the lift into the ground floor of the Pinehill Crest Hotel. Pinehill is hosting three different conventions at the same time. There are spiritualists channelling Om, phyisists unvieling a new temporal accelerator and there are cross-stitchers. It also gets to play host to a dead body in the next lift and that discovery is enough to kickstart a murder investigation but each of the conventions requires someone to watch over them, the Doctor says. Ace looks in on the phyisists, while Benny goes away with the spiritualists and the Doctor gets to indulge his skills with the cross stitchers.

Expecting to get the loonies, Benny witnesses the beginning of the invasion from Om of the Scourge, who, surprise, surprise, doesn't turn out to be the nice entity that the spiritualists have been worshipping. But why does the Doctor decide not to repell the invasion at first and offers them help in establishing a foothold on our world?

Paul Cornell manages to juggle all these plot-threads perfectly, with each convention getting its own time to shine and ties into the end result. And there are plenty of twists and betrayals along the way. However, this very dark plot gets livened up by its wisecracking that helps to propel the play along greatly.

Of course, with these early Big Finish adventures, there are moments of over-acting and the resolution is surprisingly touchy-feely. But The Shadow of the Scourge still manages to be a delightful adventure for anyone who likes their stories to be slightly on the snarky side and is an absolute must for people wanting to get into the character of Benny and don't know where to start.

In the little notes in the booklet, Cornell thanks the attendees of the Panoptican 2000 convention for inspiration. I dread to think what must have gone on there to inspire this adventure!...