Doctor Who: The Chimes of Midnight - Review 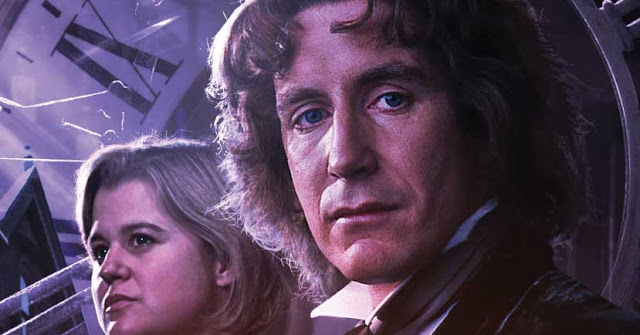 Following on from the lukewarm, Invaders from Mars, this distinctively dark story is definately a Christmas treat. The Doctor and Charley find themselves in an Edwardian House in 1906. They quickly become embroiled in strange deaths and they have to turn detective only to be surprised by how helpful the staff are in their inquiries. The strange stuff include the plum-pudding obsessed Mrs. Badderly, the butler, Mr. Shaunuaghsey, the chauffer who seems very unsure of what car he drives and a maid who is very friendly with Charley.

The story repeats itself in strange ways with increasingly odd modes of death being impliemented and each member of staff just believing these bizzaire deaths are suicide. What becomes apparent pretty quickly is that with each chime of the grandfather clock as it counts down to midnight, a death will occur when Christmas death rolls around. There are some moments of hilarity as this story parodies films like Groundhog Day and Doctor Who's own, Carnival of Monsters.

While the final episode lacks fresh ideas, which is shame because of what had proceeded it, it does become apparent that Robert Shearman's script would have maybe worked better as an hour long-special, cutting down some slightly unnesecary moments.

The setting of the Edwardian house invokes memories of stories like Black Orchid and there are nods to that serial's cases of mistaken identies. And Ghost Light plays a part in the proceedings with the house playing a big part in the companions past and that it may know more than it lets on. There are also more than several nods to the television series Upstairs, Downstairs, with Mrs. Badderly being named after one of the original actresses on the series.

Even though this story is pretty early on in his tenure on audio, Paul McGann is surprisingly at ease and India Fisher has come into her own as the Edwardian Adventuress Charley, having come across as a 'principle boy' in her delivery beforehand, here she too has settled into the role.

But The Chimes of Midnight is still a fantastic release, so much so that BBC7 released it at Christmas in 2005 and 2006 and it has recently been given a limited edition vinyl release by its original producers, Big Finish. Stephen Moffat has gone on record to say that this story is one of his favourite Doctor Who stories period. And rightly so, it feels like something that would come from his era on the show. Everything about this shines...