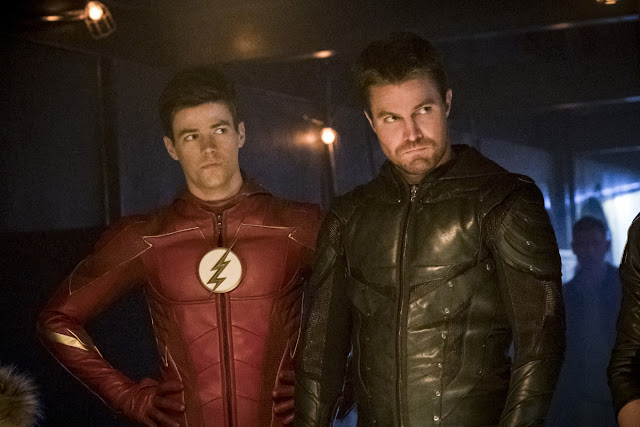 This is the episode which has turned the whole crossover around. After a slow start, Crisis on Earth X, had a slow build up and then a slightly dissapointing second episode, the conflict grows much darker here but certainly not to the point where 'good VS evil' was forgotten.

If this episode proves one thing, it is that the heroes should have travelled to Earth X much sooner as the change in setting certainly felt like the catalyst the crossover needed. From its very opening moments, Part 3 established a scope and gravitas that had been severely lacking from the previous episodes with the idea of humans still being herded into concentration camps for being gay or Jewish or being undesirable by those in power. The real evil of Earth X was apparent from its opening moments. 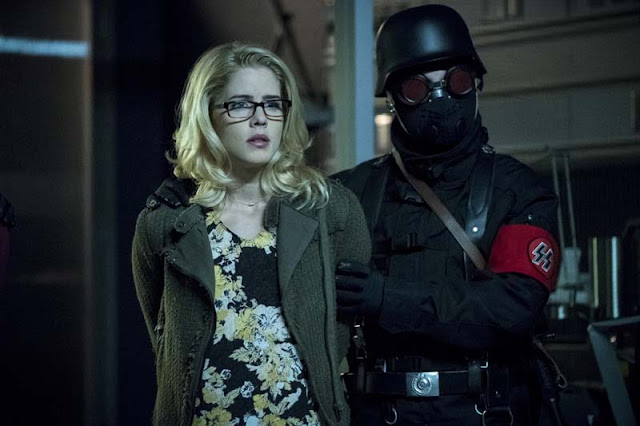 This episode also served as an opportunity to bring in some new players in the form of evil Quintin Lance, who runs the camps, General Winn Schott, The Ray and his boyfriend, Citizen Cold, a nice re-emergence for Wentworth Miller. All of these characters make nice additions to the landscape and made them worthy inclusions in this story. Paul Blackthorne nailed the sick and sadistic nature of dark-Lance, I would love to see this version of his character back at some point in the future. And although a massive crossover isn't the best place to introduce a new player to the Arrowverse, Russell Tovey makes a nice addition to the cast as The Ray. In fact, if you will pardon the pun, he and Cold were the real rays of light in this dark universe.

I got a real kick out of the scenes between Ray/Snart. Alone or with his lover, Cold is a brilliant character and Miller keeps that same drawn out, deliberate drawl to the table as he did for the original Leonard Snart in the 'real' world. One of my favourite scenes in this entire crossover was the one where Snart dismisses his counterpart's advice of making plans and then when inevitably go wrong, throw it away. But it feels like Crisis on Earth X is going to be the swansong for Miller as Cold and that is a shame as it feels like there is so much potential that will be wasted.

But even if he never returns, I'm glad that the Arrowverse as introduced another same-sex relationship. As much as I love Marvel, I much prefer the Arrowverse when it comes to its relationships because the Marvel Cinematic Universe feels very asexual. And I am sure this means the world to Wentworth Miller who has only recently opened up about what it felt like being a closested man in Hollywood. So for him to be able to explore his character's relationship towards the end of his tenure. 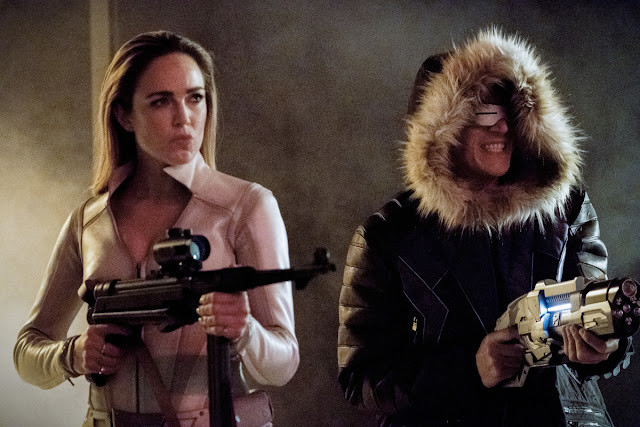 Another reason why this episode felt a lot tighter than the previous ones was because it kept all the unneccary drama to an absolute minimum. Fecility doesn't have time to dwell on her recent row with Oliver when she is too busy sneaking around STAR Labs with Iris to free their friends. It is a lot of fun seeing these two characters playing Die Hard for a little while, even if the whole thing is a play for time to allow the Legends to get there. But that brings back the problem with this crossover, the Nazi's feel like a credible threat only while the heroes are divided and seperated.

The Firestorm drama managed to stay centre stage throughout the entirity of this episode and that is only right. With Victor Garber's time on Legends of Tomorrow coming to a close end, I am glad that the writers are still finding ways to bring his exit along with some intellegent writing. This has fueled some great moments between him and Jax as the former opens up and tells Jax that he is like a son to him. And that only makes the cliff-hanger to this episode all the more difficult to watch.

And finally, Part 3 has improved on what came before by giving us another brilliant fight scene. The assult on the Earth X gateway gave us all the unbridled carnage and destruction one might expect, particularly with the cool inclusion of Red Tornado. They really are leaving no stone unturned. The entire showdown made for a really exciting way to end the second act of this crossover. But just as you think the heroes have won, one of them goes and gets fatally wounded from a gunshot. And with that, the tension really ramps itself up for what promises to be an exhilirating conclusion...