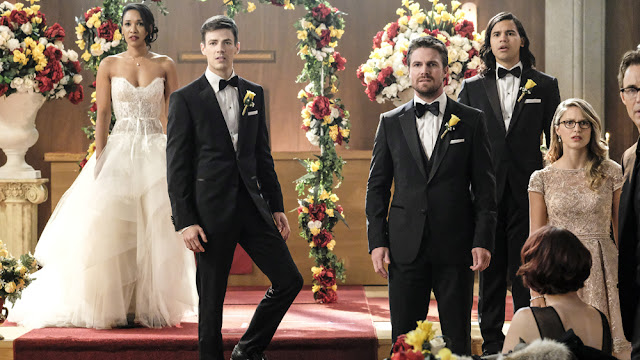 Looking back at Invasion!, this years crossover has one big advantage in that each series is a big participant. There isn't any of that Supergirl isn't relevant until the final forty-five minutes. And Crisis on Earth X isn't in a hurry to get the characters to where they need to go so quickly but at the same time, it doesn't waste having all the heroes under the same roof.

Just from being the first episode, plotwise, this crossover isn't something to write home to about just yet. We certainly don't learn anything new about the conflict between those on Earth X or our heroes, that we haven't learnt from the trailers. All we know is that the Earth X characters are Nazi versions of Arrow, Supergirl, The Flash and Prometheus and even that reveal was dragged out until the last possible minute. Revealing the true nature of the Earth X isn't really the best way of capping off the tale. It was also frustrating because it forced the Nazi characters wear masks and disguise their voices, which really limited the intimidation factor.

Looking past that slight flaw, the rest of the episode was a real blast. Barry and Iris getting married is a pretty big deal and its nice to see the writers giving their time to develop. And a big part of these episode's appeal is how they all feel like one big team rather than a dysfunctional group.

The episode is also crammed with little character moments, Mick alone, was a non-stop course for fun. Between his bathrobe incident and having to sit next to Captain Singh at the wedding but there wasn't a dull moment between him trying to interact with other characters. Best of all in this episode was his moments with Caitlin. He asks her if he kidnapped her once and even better was that he seemed to fancy Killer Frost. It would be cool to see these two becoming partners in crime over the course of this crossover. But that was only the tip of the iceburg. The episode makes no hestitation giving us all these heroes in the same setting. 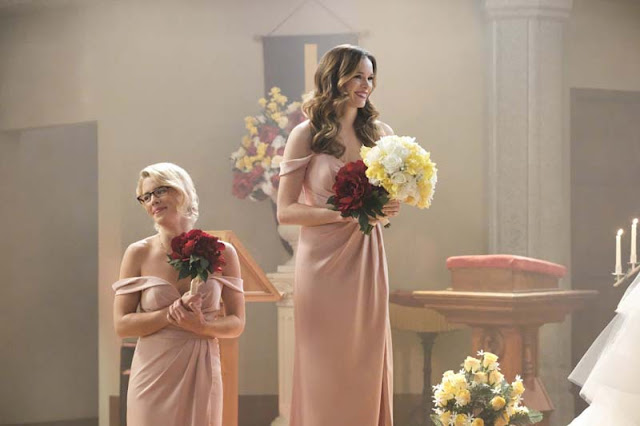 The awkward hookup between Sara and Alex was also an enjoyable little thing. It is a perfect little moment that reminds us how much untapped potential there is there when it comes to mixing up the heroes between Earth-1 and Earth-38. It is dissapointing to see that Winn, Martian Manhunter and James Olsen won't be playing big parts in this story. And it looks like we still won't be getting an Arrowverse crossover with Superman. But at least the writers were making the most out of Alex's being Kara's +1.

One of the biggest things that struck me in this crossover is how that none of the episodes are geared towards one show or another. It might be an episode of Supergirl but Firestorm is given plenty of attention and Oliver and Felicity is given as much attention as Kara and Alex's problems. This was a noticeable difference from Invasion! where each individual episode starred one group each time. This felt like a much more fluid and natural way of telling the story, we get plenty of banter and interactions and it culminated in Iris and Barry being the only ones who weren't miserable at the wedding. And that was a really nice change for Barry.

If this episode had a slow start, you can't complain about the fight sequence at the end, it was a real thrill seeing all these heroes letting rip for a rare occassion. The Flash and Kid-Flash save people from bullets while Green Arrow, Killer Frost, Vibe, Heat Wave, Sara, Alex and Supergirl make mincemint of the Nazi invaders. It felt nice having such an obvious battle between good and evil, even more so than it was in Invasion!. The battle between Supergirl and Overgirl was absolutely brilliant, even if Overgirl's mask was a little OTT. Did Kara really not recognise her own powers?

Finally, it was nice to see the episode capture the emotional heft of Barry and Iris's wedding, right up until it gets completely ruined. Joe's toast to everyone made for a heartwarming moment. These kinds of moments are something that actor Jesse L. Martin nails. I also loved seeing Mellisa Benoist getting to flex her vocals again. I assume that Barry and Iris will make it official at some point in this crossover, though probably in a more intimate setting next time...