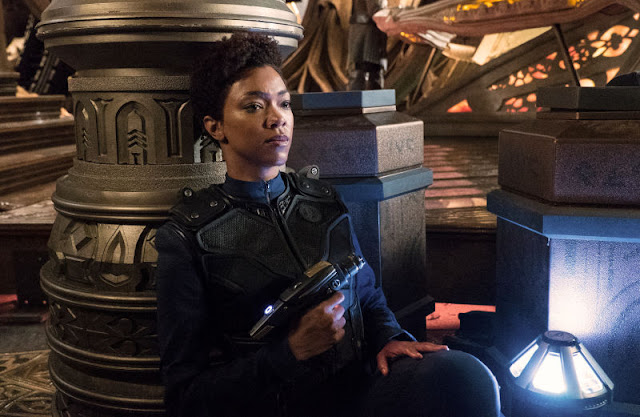 With Into the Forest I Go, there is a lot to unpack with this episode. Starting with the cliff-hanger from the previous episode, this episode focused on two narrative plot-strands. Burnham's redemption and Stamets journey into the unknown.

I'm going to start with Stamets. His arc has been one of the most interesting in the first half of this season and it has been interesting that the show hasn't fully defined what it wants to do with him. Clearly something is happening to his mind with the Tardigrade DNA and travelling through the spore-drive. From the end of the previous episode we knew that something was going to happen and it was presented to us as a potentially life-threatening situation. But I have never felt like he was in any kind of danger. While the "one-last-time" senario cliche was a little obvious, I shall be intrigued to see the direction the show takes him in. 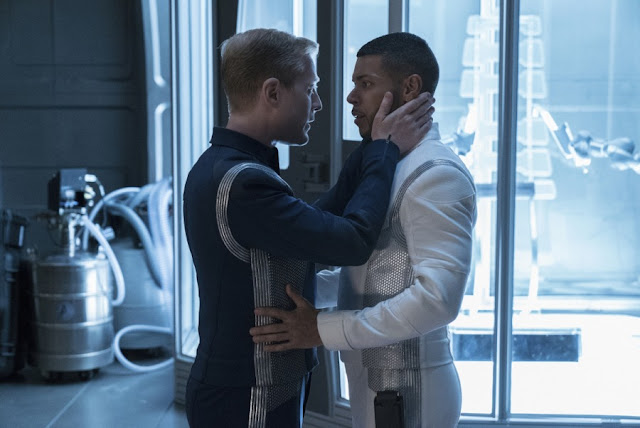 His relationship with Doctor Culber has been brought front and centre and it gave us the first man+man kiss in Star Trek history. Stamets interactions with his boyfriend were made all the more tense because of the lie he told Tilly but I liked how the resolution shone through with their love. Especially with Stamets suggesting seeing an opera he will hate! I also liked Stamets interaction with Tilly in this episode.
﻿

While Stamets and Culber represent a healthy couple, there are seeds of a relationship with Tyler and Burnham. Their interactions concerning his PTSD through their conversation and his flashbacks of his torture was a particularly good way of portraying someone strong who has some understandable weaknesses. This made me like both characters even more than I already did, even if I am now a little worried about Tyler thanks to L'Rell's statement to him. 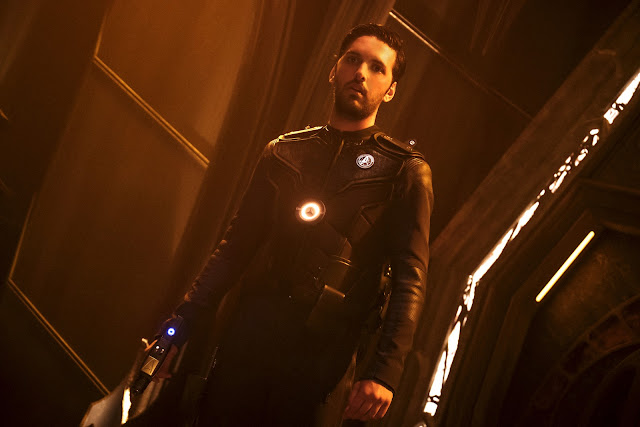 This brings up the question of if Tyler is Tyler and not Voq, who we last saw in The Butcher's Knife Cares Not For the Lamb's Cry. Personally, I think there might be something in that, many people have been wondering the same thing and it would be a brilliant twist, even if everyone has worked it out already!

As for Burnham, this episode felt like the finale for her redemption arc. She saves the Admiral and destroys the Ship of the Dead and also gets her hands on Georgiou's Starfleet insignia. I also loved the idea of using Discovery to make 170 jumps to find out how the Klingon cloaking device works.

For Burnham this half of the season has been all about her internal journey. She made a terrible choice, one that resulted in a war with one of the most vicious species in the galaxy and has spent all of this part of the season trying to come to terms with that choice. She seems determined to carry out her sentance, even though she has now found a home with the Discovery crew and Tyler. And her choices in this episode show what kind of hero she really is. She works as a Kirk/Spock mashup with a huge capacity to make the right decisions, even if she puts herself in harms way. Now it shall be interesting to see what Lorca thinks about her, does he want to be the Second-in-Command?

We get an interesting cliff-hanger too. What were the co-ordinates that Lorca inputed to the computer? Was it really to Starbase 46 or did Lorca decide to take the ship where no man truely hasn't gone before? But what the cliff-hanger really sets up is the question of where the show will go from here? I guess we will have to wait till the show returns in January and personally, I can't wait...