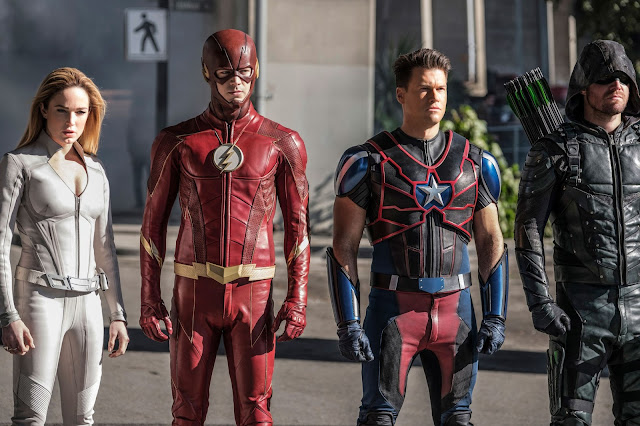 What started out as quite the slow epic crossover, quickly turned into an emotional rollercoaster. What had started out as an opportunity to see wacky hijinks and punching Nazis has now turned into some of the most upsetting moments and uplifting moments in the history of the Arrowverse. I'm not sure if this crossover used the most of the Earth X setting in the end but it gave us an non-stop stream of character moments.

Above anything else though, this crossover served as a nice finale to the character of Martin Stein and his actor, Victor Garber. Even with Part 3 ending with Stein getting shot, his sendoff was still a lot darker than I had imagined it would have been. I didn't think the writers were just going to send him off into retirement but part of me would have been content in knowing that he was still out there in the Arrowverse. 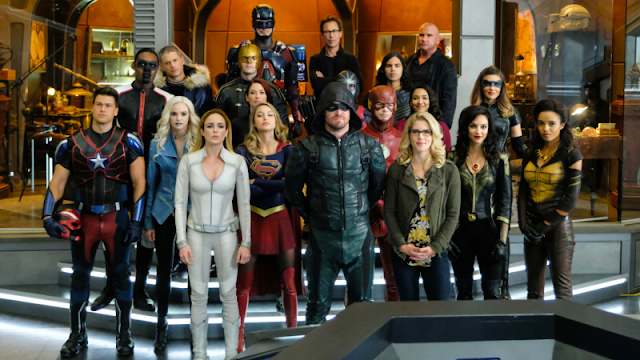 ...And there came a day unlike any other, when Earth's mightest heroes and heroines found themselves united against a common threat! On that day, the Arrowverse was born, to fight those villains no single hero could withstand! Throughout the years, their roster has undergone change but their glory has never been denied...﻿

﻿
But maybe giving Stein a heroic death was better in the long run rather than quietly moving him to one side. It is incredibly important that events like these have some real stakes and that sometimes does mean killing off beloved characters. There is no denying that those shared scenes between Stein and Jax connected on many levels. The deepness of their relationship was really hammered home and it is clear that this is something that will weigh heavilly on Jax for some considerable time. What I do wish though is that the Legends, Barry, Caitlin and Iris had the opportunity to say goodbye, after-all they all knew him as well but there was ample time for these farewells in the funeral scene. It all served as a nice reminder of how much Stein had bridged all these shows.

Something else that was a cool takeaway from this episode was how much fun it was to have Wentworth Miller back as Citizen Cold. While this episode didn't do as much with The Ray as I had hoped it would, Snart was brilliant here. His reunion with Mick was fantastic with Mick believing that his ghost was back again. And Snart's interactions with the baffled Barry Allen were brilliant too. In both cases, these characters don't know how to deal with a Snart who is cheery and optomistic. And it is great to see that Miller will be sticking around for a little while yet before finally hanging his costume and cold-gun up for good.

These moments and others, like Zari donning her costume and the Atom saving Supergirl were what made this tale sing. It is a shame then that the final confrontation between the Arrowverse and Earth X wasn't as fantastic as one might have hoped. And it all boiled down to the point I had made in my review for Part 1, the threat of Nazis, The Dark Archer, Overgirl and The Reverse Flash were nothing for the combined might of the Arrowverse. The scope of the battle in Part 3 wasn't there in this final confrontation and I kept hoping for the appearence of Overman at some point but nothing ever came along to shake things up. 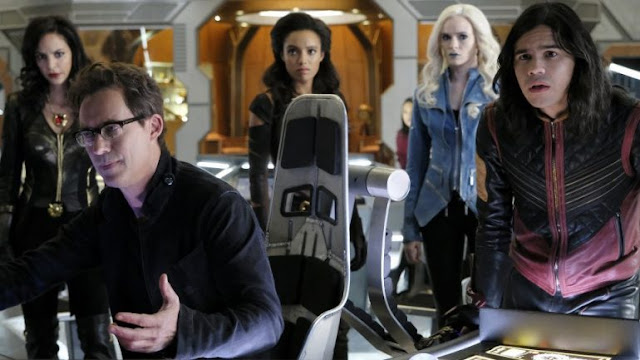 HR,(Tom Cavanagh), Cisco, (Carlos Valdes), Killer Frost, (Danielle Panabaker), Vixen, (Masie-Richardson-Sellers) and Zari, (Tala Ashe) can only watch as Supergirl zooms Overgirl into space with the imortal line, 'Up, up and away!".﻿

There were some fun moments throughout the battle though. Killer Frost steals something out of the pages of The X-Men and flies around on an ice-slide. We get treated to another battle between Barry and the Reverse Flash with plenty of slow-motion combat thrown in for good measure. But once more, the conclusion felt like a certaintity from the outset and there wasn't much urgency behind the Central City battle.

Something else that I wasn't thrilled about was the way the battle between Barry and Thawne was concluded. While I didn't expect Barry to actually kill his former mentor, it was surprising to see him let Thawne get away and he gave him a free pass for his hand in the whole Earth X thing. Surely there is some middle ground between killing a major villian and letting them get away, unlike Oliver who kills the Dark Archer. This is another example of an Arrowverse hero making a questionable tatical decision that might come back to bite them all later down the line!

Luckily though, this episode picks its momentum when it shifts from fighting Nazis to its more emotional stuff. There is a lot to like in those final moments, the friendly parting between Sara and Alex and the hug between Snart and the bewildered Barry.

Part 4 of this crossover ends thing the only way it could have possibly done. It gives Iris and Barry their happy ending and they get married. I wish that they had let Supergirl stay around for that but the fact that Oliver and Felicity also got married with them as well was a good idea. And that scene made a great use of Diggle who had been forced to sit out this crossover out. So with two weddings, a funeral and a number of changed heroes emerging from this crossover, never let it be said that Crisis on Earth X didn't have anything of a tangible impact on the wider Arrowverse. So I guess, in that respect, this crossover was superior to Invasion!...