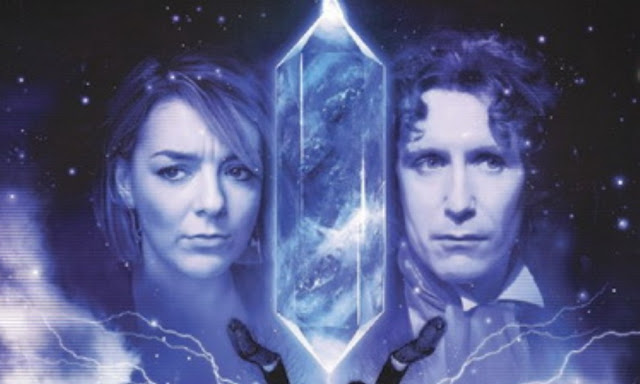 I've seen Planet of Spiders, Jon Pertwee's swansong story so I know who the Metabelis Spiders are. What is so obvious when listening to Worldwide Web and the previous story, The Eight Truths, is how much they rely on the listeners already knowing who and what the spiders are and the events that happen in Planet. This isn't a good start.

Many listeners thought that the ending of The Eight Truths was spiders bursting through human hosts and they were surprised to learn that it was just them climbing onto the backs of the humans. What is worse is that it takes till track 5 for them to tell you what is happening. Even though I had an idea what was happening, this is too long to allow your audience to flounder. On the audio medium, you don't know that the spiders are supposed to be invisible. Worldwide Web seemed to be a wakeup call for Big Finish, not everyone listening had seen every Doctor Who story out there.

But even if you were the world's biggest fan of Planet of Spiders, there would be little to enjoy in Worldwide Web. Like the previous story, it isn't outright bad but often dull. The characters continued to be nothing but ciphers to a boring and over complicated plot. The human characters keep on being hypnotised left-right-and-centre, leaving little time for interesting development. The plan from the spiders is overly complicated, made only more tedious by the in-fighting between them all, though that only happens when it is pretty convienant to the plot. Really, the Great One needed a reason to rush her plan, so the rebels force her hand. It didn't feel like a natural development at all. It also seemed odd that such empasis was placed on the stellar manipulator that in the end, it isn't even used to manipulate stars, just a big battery. And Heaven? I don't know, I had lost all interest by that point.

One aspect of Worldwide Web that is better is that it gives Sheriden Smith something to do. We get to learn that while the Great One might be occupying Lucie's body, they can't occupy her mind. Lucie spends most of her time taunting the Great One, who for some reason speaks without a distortion in her voice. Sheriden shines throughout the scenes where she argues with herself, as did Eddie Robson's dialogue, so it is a shame that he couldn't keep that strong story telling up throughout the whole thing. The Doctor's doesn't get a time to shine, in the end he builds a gadget to save the day. It is the worst resolution to the worst sort of alien invasion story.

The guest cast continued to be underused but I've already discussed that in the previous story review. I'm not sure that I enjoyed the re-portrayal of Karen, having heard her in Human Resources and Grand Theft Cosmos and how she is suddenly shocked at the actions of the Headhunter. Did she sleep all the way through the Headhunter's actions in Grand Theft Cosmos, especially where she was trying to wipe out everyone in the universe?! Her character resolution was pretty rubbish as well.

At the end of the story, the Doctor and Lucie decide to go to some distant corner of the universe to take care of something important when they decide to go to Blackpool instead. It is the last unsatisfying moment in a dull third season of the Eighth Doctor Adventures. Alright this wasn't an out-and-out bad adventure but it was always a difficult story to enjoy. It is made all the more disapointing because Eddie Robson can normally be relied to on to produce something wonderful. This just wasn't...