Doctor Who: The Two Doctors - Review

What can one say for The Two Doctors other than oh dear. Oh dear indeed.

I will admit I've always had a soft spot for The Two Doctors, it is one of those stories that is so bad, its good. But it is a collosal mess of a story.

Robert Holmes, one of the best writers Doctor Who ever produced but he always worked best when he could just get on with things on his own. Unfortunately, the producer - John Nathan Turner, wasn't someone who left people alone to work. When Holmes was commissioned to write this multi-Doctor story he was also given a shopping list of things that had to be included. He had to include the Second Doctor and Jamie and the setting had to be New Orleans. Apparently Holmes' original script with these requirements was pretty good. But things went south when New Orleans proved to be too costly to film in and the production had to be moved to Seville in Spain. For all his efforts, Holmes fails to make any of these things in his script meet, particularly the inclusion of the Second Doctor and Jamie. 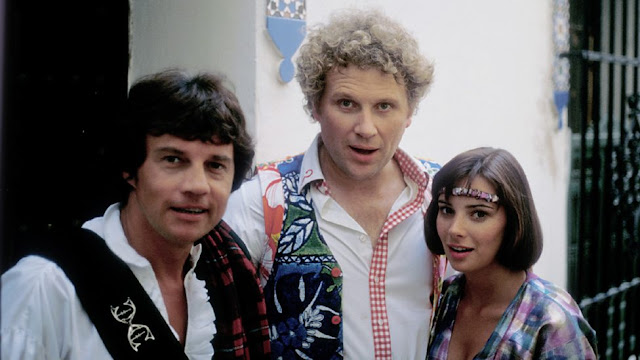 For a story that claims to be a multi-Doctor tale, it spends much of its time seperating the two Doctors and they are hardly ever in the same room together. For the majority of the story, they are kept apart and then only meet up at the very end and their meeting scene is stupidly brief. Surely the whole point of these stories is to see how the Doctor acts with younger versions of himself. And if they don't get to do that, then what is the point? 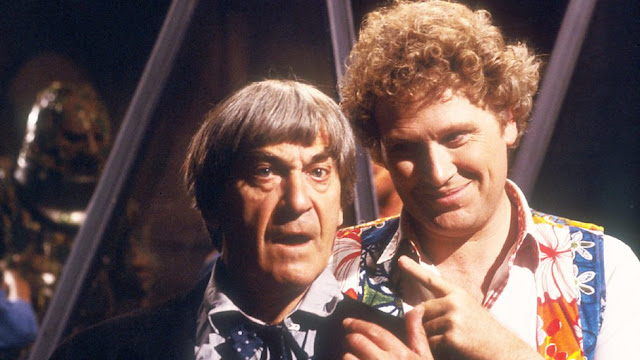 Colin Baker, (The Sixth Doctor) and Patrick Troughton, (The Second Doctor), enjoy some antics behind the scenes.﻿

Ultimately what this story really wastes though is Patrick Troughton and Frazer Hines. Both actors slip brilliantly back into their old roles, excellently reminding us what it feels like to have a Doctor and companion who actually like each other. But neither of them is given a lot to do. Troughton spends much of this story unconscious or tied down to a table while Hines takes turns with Peri asking the Doctor to explain himself. It is a pretty pointless encore for two of the show's most popular characters. Maybe the story would have worked better had then been replaced by Time Lord agents. That way we would have also been spared the headache of trying to work out what part of the continuity they come from!

And another thing they certainly should have got rid of is the Sontarans. The story already has been granted with three pointless villians why add them into the mix? Especially when the Sontarans look as terrible as Strike and Vral. And while I know that the make up for these potato-heads have never been Oscar-worthy, but they have certainly looked a lot better than they did here. The two actors don't even fit into the costumes and they look like they are wearing something for Halloween that was rejected by retailers for being too naff, even by Halloween standards...