Doctor Who: The Axis of Insanity - Review 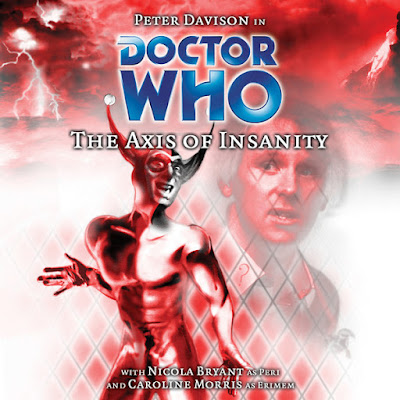 Now, I'm not to fond of evil one-dimensional clowns but this is a good old-fashioned Doctor Who adventure with some memorable 'Doctor Who Canon' moments, to keep everyone happy and makes it worth a good listen.

The recent addition to the TARDIS, Pharaoh Erimem is still settling into life on the TARDIS, when the ship gets drawn of course and into a nightmarish dimension. From the get-go, the stakes are high, if things go wrong in this dimension, then things will begin to unravel in the real universe. The dangers of this story are epic as well, dragons, insanity, lies, over-the-top acting and a devil-may-care approach to the laws of physics. Peri, Erimem and the Doctor have to rely on their wits to survive the ordeals in the Axis.

For most of this story, everything is pretty straightforward with thrills, danger, a lot of running and puzzle solving. There is a rather cardboard villain, scary monsters and some settings that are so wild that not even the modern series could acchieve them. This is one of those stories where the imagination trumps CGI. The plot is fairly paper-thin and it relys on the thrills rather than the actual story.

On the first listen, The Axis of Insanity didn't impress me all that much. Sure, it was a decent adventure but it would never land on any of the best Big Finish lists.

On a relisten, it was very impressed by the character work it manages to acchieve. Erimem, although an early adventure for her character, is still proving to be a much needed addition to the crew and she gives Peri a friend to trust and nurture. Coming from an ancient civilisation, Erimem is pretty good at getting her head around things that are out of her sphere of reference. And her courage and resourcefulness compensate for her niavity.

Peri gets little to do in this story besides stand around and give little quips and try to survive. The Fifth Doctor gets to show off his action hero side while his actor, Peter Davison, gets to prove that he can act like he is in terrible agony.

Best of all happens towards the end of the tale. There are some comments on what makes Doctor Who, like who and what the Time Lords are. There is even a brief discussion on the relationship between the Doctor and his companions. It is much more in depth than that discussion in Scherzo. There is also a touching end scene which the rebooted series has been thoughtful enough to pick up and continue with.

Unusually for a Big Finish story, the best part of this story is episode 4, where all the action comes to ahead. This is where the Doctor and Erimem face their darkest ordeals and this is where we get to hear the canon-monologues that is particularly satisfying. Ultimately though, this is a story let down by its comic book villain, stopping it from being elevated to greatness...