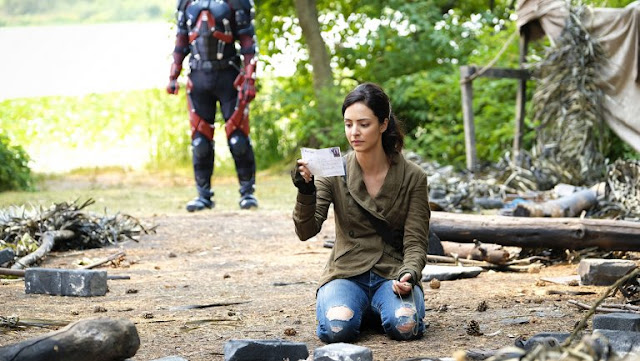 Okay so, this is the problem with Legends of Tomorrow. When the premise for a show is packed with as much silliness as this is, your margin for error is always going to be pretty small. This is a show which has been incredibly strong for the best part of two seasons but at its core, it is still a show about a group of goofs pratting about in a time machine. As such, this is a show that is played as an action-comedy and there are plenty of pitfalls. Fundimentaly, time-travel is terrible. Comedy is something that is really hard. And trying to stuff dialogue into those two themes, has the potential to make things come out as wooden.

Legends has had some of those problems from time to time but the writing has always been so smart and confident that the producers have never really had to deal with more than one of these problems at a time. Unfortunately, this episode was peppered with problems.

For quite some time into the runtime of Zari, it looked like Dominic Purcell's Mick Rory might manage to hold the whole thing together. Purcell has always been a fan favourite in this show because it is evident how much he enjoys playing the criminal Heatwave. He is an unabashed reprobate and the beginning of the episode is happy to play up to him. Things start to go south when the team go to 2042 following a call from the Time Bureau agent, Gary. There, they meet the watery villian Kuasa, the watery sister of Vixen from 2017. As usual, she is trying to kill someone.

That someone turns out to be Zari Adrianna Tomaz and I really liked how little of her background and story was explained. The Legends find her hidden in a warehouse but they bring a drone that belows to ARGUS, that has tailed them. Luckily, Zari has hacked into the systems and it can't see her. They don't go into how she manages to do it but I'm hoping they leave it for a later explaination.

At her heart, Zari is a criminal so they lean towards Mick to help her out. And this is where the problems really begin. Clearly they are laying the groundworks for a romantic relationship between the two and it isn't that I'm opposed to. The ploting is the issue.

The script tells us that meta-humans and religion were outlawed in 2021 and it was left to ARGUS to enforce the laws. The drone calls out Mick, Ray and Sara as meta-humans but they aren't. Nate is and when he has his suit on, Ray could be discribed as such, but Sara is your run of the mill ninja-lady and Mick runs around with a fire gun.

And this laziness is something that affects the whole of the episode. The episode spins its wheels with Stein running tests on Amaya to see what is wrong with her totem. She tells him the tests are pointless and surprise, they are! It adds nothing to the plot. Despite knowing something is wrong with it, no one suggests she takes it off and when she tells Nate about her problems, her answer to his suggestion of taking a time machine back to her time to ask, is that it is a stupid idea.

Instead, Nate replicates some funky herbal tea, they get lit together and go on a vision quest. Amaya's quest takes her to her ancestors who are living in some kind of evergreen paradise. Her ancestors tell her to roll with her powers growing in dangerous strenghts and making her bloodthirsty. Nate just gets real high.

At this point, Mick, Jax, Sara and Ray have gone into a prison to break Zari and her brother out. As usual, they get into trouble and call back to the Waverider where Nick Zano gets to act high as Nate until Jax gets fed up and engages the autopilot to come and pick them up. At no point does no one ask why Stein can't pilot the ship. When the Waverider does pick them up, it is explained that Stein was helping Amaya to the sickbay. And that is an idioc excuse, though not as idioc as what comes next.

The Time Bureau then turn up. They have figured out that the Legends are a team of collosal misfits and that they are screwing time up even more. Agent Sharpe shouts/flirts at Sara and no one seems to remember that they have had Gary on board all along! So then everyone begins to fight and Amaya comes to terms with her totems bloodlust. Sharpe looses a game of time-ship chicken and the gang then fights Kuasa to save Zari and invite her onto the team.

Now a normal episode of Legends of Tomorrow might have made one of those mistakes and powered through it, succeeding on the teams chemistry and fun. But any more than one mistake and the episode starts to run into the wall of the show's premise and then the mistakes are insurmountable...