Doctor Who: Time in Office - Review 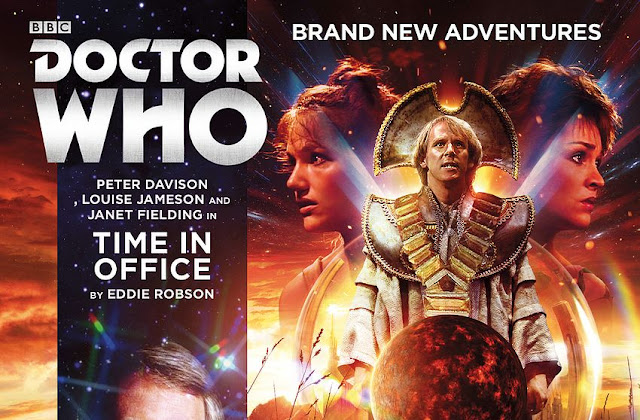 Following on from The Five Doctors, the Fifth Doctor has to fufill his promise of being the President of Gallifrey. Taking place during Frontios where the Doctor and Tegan take the Gravis to an abandoned planet, they are contacted by Leela, who warns them that the Time Lords are after them. But for me, the story's main selling point was the meeting between Tegan and Leela, two of my favourite companions, so it was a case on 'take my money!'.

Normally known for his Eighth Doctor work, Eddie Robson now turns his attention to the Fifth Doctor and has penned a rather lovely and distinct chapter in this incarnations life.

Pulled off course by the Time Lords and despite the warnings from Leela, the trio must handle all sorts of incidents in the Capitol including overzealous clean-up crews, assassination attempts and Time Lord conspiracies. Time in Office sees the Doctor, Tegan and Leela kept very busy as they try to figure out their duties.

Brilliantly each story is almost completely seperate from each other. They are all connected by the fourth episode which plays with the threads woven through the first three but each episode is almost a self-contained adventure. It is also full of fan-pleasing moments, including the fact that Leela took out the Raston Warrior Robot all by herself as well as a confirmation of a long-held fan theory concerning the Doctor's biology.

I've already mentioned this above, but the strongest part of this set is it's fantastic cast. Janet Fielding and Louise Jameson in particular, are a joy to listen too. Fielding nails the best parts of Tegan's personality, once again proving she is far more than a mouth on legs. And Jameson manages to pull back Leela from the ether, with this story set long before the events of Gallifrey. Here the younger Leela is still learning the Time Lord ways but isn't the impressionable young warrior she was when she first met the Doctor. It is a nice touch that both companions get along and become a force to be reckoned with in this society.

Peter Davison also brings his acting experience to the fore, giving us a much wearier Time Lord, that is perfectly suited to this story. Actually, this is the only one of his incarnations that I can see having a good time as President of Gallifrey. When they are all together, the cast bounce brilliantly off each other and their chemistry makes this a joy to listen too. It is nice to hear that following on from all these years, these old characters can still be giving new things to do.

Helen Goldwyn, someone who normally does voice work has beautifully directed this set. And considering this is only the third story she has directed, I'm impressed by the obvious handle she has on it. Lets have more of her work please.

Time In Office offers us a unique narrative, structure and a brilliant cast. And is a Doctor Who story like you've never seen, read or heard before. One could easily hear a whole series of adventures set during this run, though if we are ever only going to get one two-hour story for it, it's time well spent...