Doctor Who: Love and War - Review 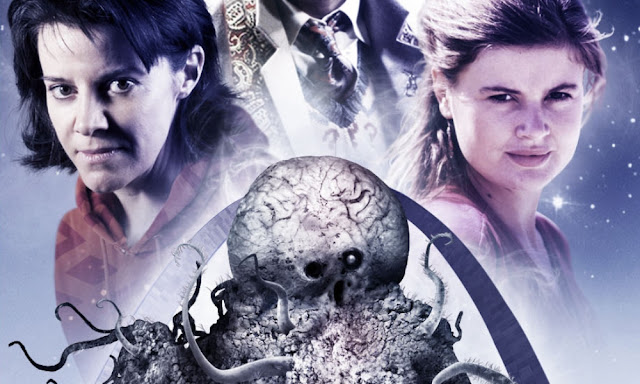 Love and War is the Big Finish adaptation of the book with the same name, the very first in their novel adapatations range and the first book to feature the popular companion, Professor Bernice Summerfield. Released in 2012 as a celebration for Benny's 20th anniversary, it also works as a celebration of Big Finish itself as the first ever audio production put out was Bernice Summerfield - Oh No It Isn't! And that was also adapted by Jaqueline Raynor.

Oh No It Isn't! and all those other releases from her first series was actually my first proper introduction to the character and in this case, I'd already read the novel. With that having been said, it was so long ago all I remember was Benny joining and Ace leaving, some fungoid aliens and an alien planet called Heaven. So I came to the audio adaptation of Love and War almost completely new, eager to learn of Benny's origin story.

Love and War seems to continue straight on from the end of Survival, much more successfully than the lackluster Season 27, series they did a little while ago. It is a little bit too fast and jumpy, like Curse of Fenric and Ghost Light and Ace continues to be loud, opinionated, inexperienced, and loveable. Love and War works as a conclusion to the Ace 'trilogy' of stories comprising of Ghost Light, Curse of Fenric and Survival. It gives Ace her first real romance and her first real taste of loss and even though Paul Cornell handled this material well in the novel, the chance to hear Sophie Aldred perform it is invaluable.

Likewise, Sylvestor McCoy seems to have stepped out of the end of season 26, with his Doctor enacting some complicated plan, this time one that requires him to forget parts of it in order for it to succeed! This Doctor is instantly regognisable, flitting in and out of scenes and being portentous but humerous when the situation calls for it. Lisa Bowerman of course, excells at her origin story and she is instantly regognisable as Benny, though a little less battleworn than the more recent version of the character. I was surprised as to how quickly she opened up about her story to the Doctor and Ace, this is her miles away from her Braxitel Collection days! She doesn't feature heavily in the plot, but she is there, playing a key role, something you can see happening had she appeared on television.

This story isn't without its problems though. We get Doctor Who Magazine's well written prelude to the main event, but it doesn't work well in an audio format. We've got a pre-credits sting of a snarling bad guy and then there is the way that the end of episode one is performed. It feels like no one knew that is where it was supposed to end. But perhaps the biggest problem with this story is the love story between Ace and Jan, which moves at an outstanding pace to the point where they are in love. Luckily the scenes between the pair are written well enough, they just feel a little awkward but once you get over that, it is alright.

But having said that, there are moments which work better on audio than they do in prose. There are the quick cut backs to Ace in Perivale and her youthful adventures with her friend Julian. These come in at a few key moments and work at building up what we learnt about her background in Survival.

There is a large number of characters here too. My favourites include Riona O Connor as Marie Mab Finn and Aysha Kala as Roisa McIlnery. The pair share a number of well performed scenes with some pretty intense stuff going on and they handle the material like pros. Perhaps the weakest links in the cast are Ela Gaworezewska as Christopher, who sounds like a woman lowering her voice rather than and androgynous person and Bernard Holley as Brother Phaedrus, who we occassionaly cut too so he can say something evil. But what is particularly nice about this large group is that each one gets treated like a character, each one coming with backstory and their own desires. They aren't just plot devices.

Love and War is a big story that claims to be even bigger than it is actually is, with the Doctor building up the threat of Hooti to something that they aren't. Ace declares that the Doctor is out of his depth when he hasn't really done anything at that point and all of the lines seem to be trying to generate tension that isn't actually there. In part two, when things really get going, we get a large and tragic story that works brilliantly for the Doctor and Ace and ties up Ace's development brilliantly.

The direction from Gary Russell and the music from Steve Foxton do let the side down slightly at times. Ace and Jan's journey into space doesn't get quite the buildup it deserves and there are some heavy conversational pieces that don't really get the attention they need. But these only stand out because he rest of the play is so exceptionally well done.

What Love and War does brilliantly is take Doctor Who back to 1989 and evokes the feel of the show. Fresh, young, emotionally true, ambitious, a bit niave, but thoroughly and utterly enjoyable...