Doctor Who: A Heart on Both Sides - Review 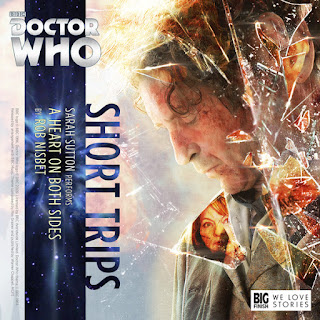 I'm not going to pretend to be unbiased, but this short story shows off why I am so very fond of Sarah Sutton as Nyssa. I was very surprised to find this was exactly the sort of thing I was hoping for when Big Finish announced this story.

Taking place somewhere in the fifty year gap between Terminus and Cobwebs, Nyssa managed to get her hands on a beat-up spaceship called the Traken and continues her work as an outerspace Florence Nightingale. Many of Nyssa's fans have imagined that it is this she is doing, so it is satisfying for all the canon. What is a little more awkward is fitting the Time War in the gap between her leaving the Fifth Doctor, Tegan and Turlough and her meeting them again. But the story is worth it.

As so often happened before, Nyssa is deposited in some grubby industrial complex, completely unlike the beautiful gardens she was used to on her homeworld. On this new planet she is drawn into a minor skirmish in the early years of the Time War. Someone is threatening the lives of her patients and her own as well as everyone else on the planet. In the process of learning the truth, she learns some uncomfortable truths about her old friend and his race, which she thought she understood.

The Eighth Doctor puts in a clever little cameo which is entirely within keeping of his character. Sarah Sutton had obviously done her homework, just as she had perfectly voiced Doctors 1-5 in The Toy, she captures the spirit of Paul McGann's offhanded but earnest style of performance.

While this story is just another who-dunnit story for Nyssa, there are some nice and touching moments for her and the Doctor. There are plenty of callbacks to the Fifth Doctor era to justify having the 80s theme music, despite the Eighth Doctor's grittier material. There is even a nicely veiled nod to the Doctor wearing a stick of celery.

A Heart on Both Sides is not only a glimpse of Nyssa's live after leaving the Doctor's world but also a glimpse at the Eighth Doctor who is trying to navigate the morals of the Time War. It is little wonder then that he finds himself drawn back to one of the most moral people he ever knew...