Doctor Who: The Eight Truths - Review 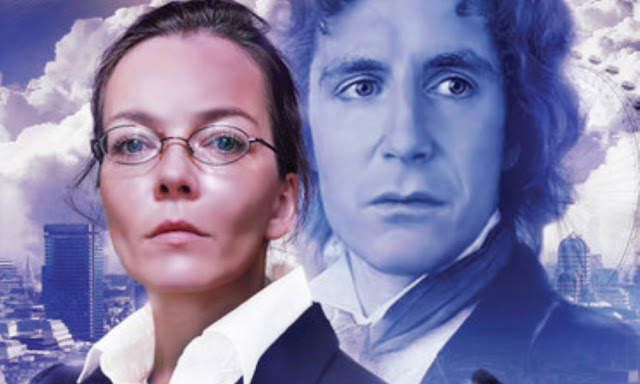 Apparently in imitation to the modern-day show, the Eighth Doctor Adventures range elected to end each series with a two part story. The first series ended with Human Resources by Eddie Robson and featured the Cybermen. The second series finished with Sisters of the Flame and Vengeance of Morbius by Nicholas Briggs which brought back Morbius, another evil Time Lord. But by the time the third series of this range came around, the 'big-baddie' barrell must have been running dry because this sees the return of the Metabelis Spiders.

I've seen their original appearence and Jon Pertwee's swansong story, Planet of the Spiders a few times so I know about their origins. But is any of that relevant to this story? Well, no. The spiders feature very little here. Their main involvement is to jump out at the end of episode two and give us a cliff-hanger. Its all pretty dull.

In fact, dull, seems to be the right term for The Eight Truths, for a story about a second sun appearing in the sky, it is all pretty low-key. The Eighth Doctor spends much of his time running around in circles doing nothing. He tries to find a missing satelite and a stellar manipulator while trying to find Lucie, not succeeding at any of those points.

Having failed to use Paul McGann in any really interesting way, does this story fail to use Sheridan Smith as Lucie Miller in a better way? No, she doesn't really get treated any better, she has barely begun the story when she is hypnotised by one of the spiders, joins the Eightfold Truth and spends the story under their influence. A hypnotised companion is one of the most uninteresting things in the Doctor Who canon and this story is no exception. Thankfully, the Eightfold Truth scenes are livened up by the inclusion of Katarina Olsson as the Headhunter, who still manages to ooze disdain for everything and everyone around her.

But the rest of the cast aren't really up to much. Karen Coltrane is back alongside the Headhunter, having sat out Orbis for some reason. The original actress for this character has been replaced with Kelly Godliman who is competent but nothing special. No one else really gets much to do so it is harder to rate them, Stephen Moore's - Clark Goodman does nothing but fret. Sanjeev Bhaskar's - Avishka Sangakkara is your typical confused human scientist and Sophie Winkleman as Kelly Westwood starts out as fun but ends up as a 'what if?' companion. All of these characters are used as nothing more than ciphers and merely serve as functions to the plot, such as it is.

Many of the other plot elements aren't interesting, even though the image of the Earth having two suns is quite a good one, though nothing happens with it, nor is there much reaction from the general public, except for the hillarious taxi-driver. The Eight Truths are exactly the same as the other monster-backed cults that have often featured in Doctor Who. There is nothing to spark the imagination, something particuarly bad when it comes from someone as good as Eddie Robson.

I honestly don't know if the badness of this story comes from the return of the spiders but The Eight Truths just isn't engaging. It is frequently dull and displays a curious lack of interesting ideas. Listening to this story the other day, my excitement for the subsequent part, Worldwide Web pretty much doesn't exist...