Doctor Who: Black and White - Review 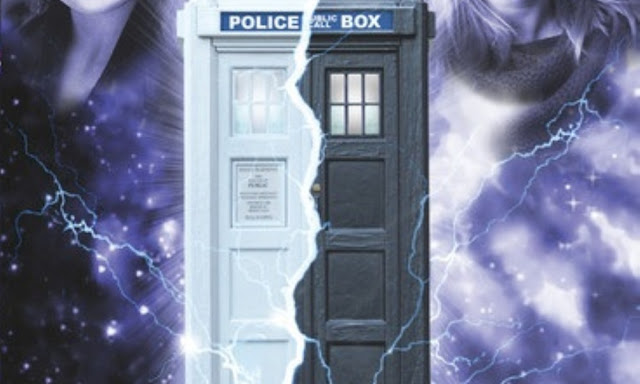 Produced during the time Sylvestor McCoy was filming The Hobbit, Black and White was the second a Doctor-light trilogy consisting of Protect and Survive, Black and White and Gods and Monsters. Because of its turbulant production the story had a couple of points that it needs to hold it. It needs to continue weaving the complicated tapestry of the Seventh Doctor, while working pretty well as a standalone basic Doctor Who story about Beowulf. Luckily, writer Matt Fitton manages to accomplish both of these tasks, even if they aren't as well intergrated as one would like.

Black and White opens with a needed recap of the conclusion of Protect and Survive, as a black-TARDIS arrives to rescue the occupants of the white-TARDIS, leading to some confusion as four companions, Ace, Hex, Sally and Lysandra attempt to figure out how they can have all been the Doctor's companions at the same time. Their dealing with this emcompasses much of the opening episode, as they have no choice but to work together to piece together their histories. We get to hear how Sally and Lysandra joined the TARDIS crew in flashbacks and luckily, both characters prove to be pretty likable. The immensity of this trilogy we are in the middle of suddenly feels huge and understanding it proves to be fascinating and it looks like in Gods and Monsters, there is even more to come.

Once their confusing is sort-of sorted, they begin their hunt for the Doctor and some answers and they end up doing this in two groups. Ace pairs with Lysandra, while Hex goes off with Sally. The two groups end up searching for the Doctor in medieval Scandinavia, though they are quickly distracted from their hunt by a warrior with name of Beowulf and an alien trader called Garundel. This plotline is pretty enjoyable on its own terms, though there are moments where it feels far too slight. Hex and Sally are pretty sidelined and wander around aimlessly, while Ace and Lysandra actually get to discover things relevant to the plot.

With this being Doctor Who, the story of Beowulf isn't all that simple. While there is no alien invasion here, it is the story of two men, one man who is attempting to be a hero and the other who attempts to make everyone that the first is a hero. These plot points are surprisingly well done given the small canvas it has to play on given the larger plot going on in the background.

Michael Rouse and Richard Bremmer do an excellent job as the younger and older Beowulf's, playing him as someone quite dim but well-meaning and cunning. But I particularly enjoyed Stuart Milligan's Garundel. It is a far cry from his performance as Richard Nixon in The Impossible Astronaut/Day of the Moon. Who knew a villain could be so 'fabulous'?!

Sylvestor McCoy does make a few fleeting appearences in a series of flashbacks, establishing what the hell has been going on through the several previous stories. While their small and often quite cute, they portend to something much bigger. His only appearance I didn't like was the scene where he has to play tortured. Obviously McCoy isn't quite up to the task and the fact that the baddie cackles like a bad cartoon baddie doesn't help matters.

When Black and White comes to a close, the story of Beowulf is over but the larger tapestry is far from being all over. Why did the Doctor want the TARDIS to go there in the first place? What is his ultimate plan? Why does he need four companions to help him? There is a lot to look forward to in Gods and Monsters, but the journey that got us there has been pretty damn good too...