Torchwood: Aliens Among Us Part 1 - Review 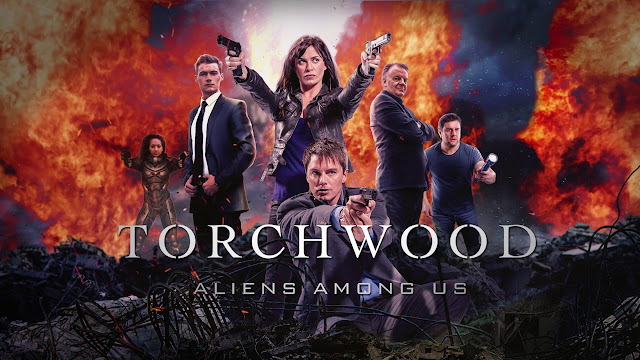 Following on from the events of Miracle Day, Captain Jack and Gwen Cooper have restarted Torchwood but Cardiff is a very different city. Something terrible is happening and everyday is getting darker and darker. Torchwood needs to adopt a whole new approach.

Part 1 of Aliens Among Us is a really brilliant start to a new series of Torchwood. Given this is effectively series 5 of the show, we get all the characters we are already familiar with and they are made even better with some Big Finish elements as well as some tying into the comic book series' from Titan Comics.

Without giving too much away, those elements from the comics are some of the most fascinating elements of all the story. They tie into Classic Doctor Who well and into the continuity of the Torchwood world established by John an Carole Barrowman. I really hope the see the subplot involving a Torchwood regular is given enough room to breathe, not only for the benefit of Big Finish listeners but the comic book regulars as well.

I really liked the new characters Tyler Steel, Mr. Colchester and Orr. Sadly given the dynamic of the show, I doubt Mr. Colchester's husband will be long for the world as some of the themes explored through Orr seemed to be foreshadowing something.

I really liked Orr in Superiority Complex, particularly when she said he powers was turning something into a lift! Gwen's reaction was priceless!

All in all, Aliens Among Us Part 1 was an excellent set for a brand new series of adventures for Torchwood. These four stories set up the rest of the series nicely and promises some very exciting and interesting things to follow...